Tata Motors will officially unveil the Punch micro SUV early next week. It is likely to be launched by mid-October and will rival the likes of Maruti Suzuki Ignis.
By : HT Auto Desk
| Written By : Sabyasachi Dasgupta
| Updated on: 30 Sep 2021, 04:10 PM 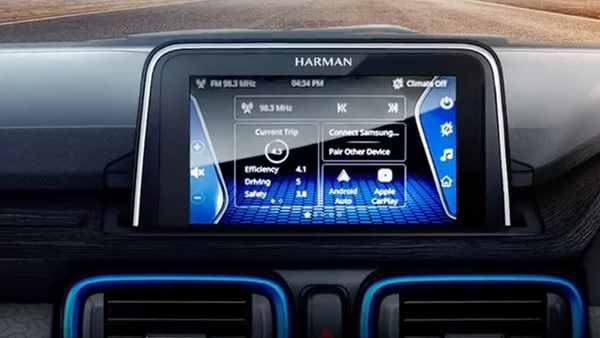 Tata Motors is all set to break covers of the upcoming Punch micro SUV in India. Ahead of the debut on October 4, the carmaker has teased some more interior features that will be part of the Punch SUV.

Tata Motors has revealed that the 2021 Punch will get an infotainment system from Harman. The look and size of the touchscreen system is pretty similar to that with Nexon SUV or Altroz premium hatchback.

Besides entertainment features, the infotainment system will also share key driving informations like efficiency, connectivity and other aspects. Punch will be compatible with Apple CarPlay and Android Auto. However, it is still not clear if they will come with wireless connectivity features.

Tata Motors is likely to officially launch the Punch micro SUV next month. It may price the 2021 Punch aggressively to lure customers who are looking to buy a car that looks more like an SUV, but is easy on pocket.

Tata Punch carries a bold look with SUV-ish visual profile and high stance. It gets LED DRL units along with headlights, a wide bonnet design and a pronounced grille make it appear bolder. There are black cladding on the sides and arrow-shaped wrap-around taillights at the rear. Tata Punch will stand on a set of alloy wheels which are housed in large wheel arches.

Tata has already confirmed that Punch will come with multiple terrain modes to enhance its drive traits and is likely to feature a number of safety features as well. Some of these features are likely to be segment-firsts and are available mostly in SUVs in sub-compact or above categories.

Besides the infotainment screen, Tata Punch will also get coloured accents on the AC vents along with a dual-tone interior theme. There is also a digital-analogue instrument cluster, which also seems sourced from the Tata Altroz premium hatchback. Other features include a multi-function flat-bottom steering wheel, automatic climate control, a start-stop button etc.

This five-seater SUV is likely to be offered with a 1.2-litre petrol engine along with a turbocharged unit as an option. The engine would be mated to a five-speed manual gearbox, while an automatic gearbox will be on offer as well. This engine is capable of producing 86 PS of power and 113 Nm of torque.

When launched, Tata Punch is likely to rival players in the entry-end of the sub-compact SUV space as well as the likes of Maruti Suzuki Ignis and the upcoming Citroen C3.