Hyundai Venue facelift SUV, which made its debut in India in 2019, has undergone its first major upgrade with several changes in terms of design and features.
By : HT Auto Desk
| Updated on: 01 Jun 2022, 11:02 AM 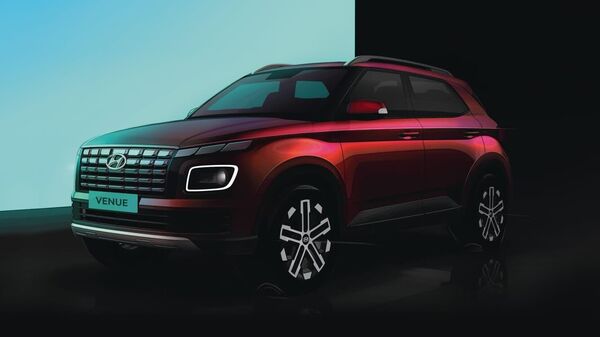 Hyundai is all set to introduce the 2022 Venue facelift SUV in India. The Korean carmaker has confirmed that it will launch the new Venue sub-compact SUV on June 16. The Venue facelift SUV, which has undergone massive upgrades for the first time since its India debut back in 2018, will come with a heavily updated exterior design and interiors. It will take on the upcoming Maruti Suzuki Vitara Brezza facelift model, which is also expected to be launched later this month, along with other rivals such as Tata Nexon, Mahindra XUV300, Kia Sonet and others.

The Hyundai Venue facelift SUV will come with design changes that are in sync with the facelift Creta and Tucson. The front grille now will have Hyundai's parametric design language seen globally in its new generation models. The LED headlight unit will also be integrated in the parametric design language. At the rear, the Venue SUV will get a new set of LED taillights and a new bumper. The profile is likely to remain largely same. The only change will be in the design of the alloy wheels.

The interior will also see certain changes, but may not be as stark as the exterior. The new generation Venue is likely to get ventilated front seats, 360 degree camera, a bigger touchscreen infotainment system, front parking sensors among other features. The upholstery and colour theme of the cabin may also see some changes.

Hyundai is likely to offer the new Venue facelift with two petrol engines. They may include a 1.2-litre naturally aspirated unit mated to a 5-speed manual gearbox. There could be another 1.0-litre Turbo GDI unit capable of churning out 118 bhp and 172 Nm of torque. It is likely to come mated to either a 6-speed manual, a 6-speed automatic and a 7-speed DCT transmission.

Hyundai may also offer the 1.5-litre turbocharged CRDI diesel unit that can generate 92 bhp and 240 Nm of torque. It is likely to be paired to a 6-speed manual gearbox or a 6-speed torque converter.

Recently, Hyundai Venue clocked three lakh sales milestone since its launch three years ago. It has been one of the best-selling models from the Korean carmaker in India besides the Creta compact SUV and the i10 Grand Nios hatchback.