Hyundai Motor will drive in the new generation Venue facelift SUV to India on June 16. It will renew its rivalry with Maruti Suzuki Vitara Brezza, which will also be launched later this month in a new avatar.
By : HT Auto Desk
| Updated on: 04 Jun 2022, 09:28 AM 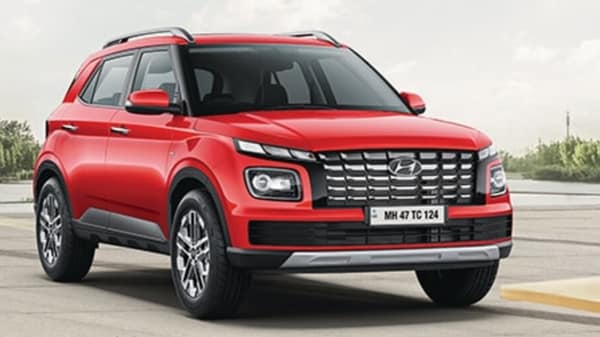 Hyundai Venue facelift 2022 SUV will be launched in India on June 16.

Hyundai Motor has revealed more details about the upcoming 2022 Venue facelift SUV. The Korean carmaker is all set to launch the new Venue SUV in India on June 16. According to the brochure shared by the carmaker, Venue facelift SUV will be offered in both petrol and diesel variants. Spread across six trims, the new Venue will be available in as many as 16 variants with three types of engine and three choices of transmission.

2022 Venue SUV is all set to renew its rivalry in the sub-compact SUV segment with some of the heavyweights. Currently, Tata Nexon is the overall leader among all SUVs sold in India. However the new Venue, along with the upcoming 2022 Maruti Suzuki Vitara Brezza facelift SUV, will aim to put up a strong challenge to the segment-leader.

Hyundai has not made any changes under the hood. It will offer the same 1.0-litre turbo GDi and 1.2-litre MPi Kappa petrol units along with the 1.5-litre CRDi diesel engine as choices. The transmission job will be handled by the familiar 6-speed manual or iMT along with the choice of a DCT gearbox too. 2022 Venue facelift will also get three drive modes which include Normal, Eco and Sport.

Among features, Hyundai will pack the new Venue with aplenty. The SUV will offer Home to car (H2C) with Alexa and Google Voice Assistant for remotely controlling the vehicle. It will also have more than 60 connected car features. The new infotainment system will now support 10 regional languages besides English. One of the segment-first features to be introduced in the segment is reclining seats in the second row.