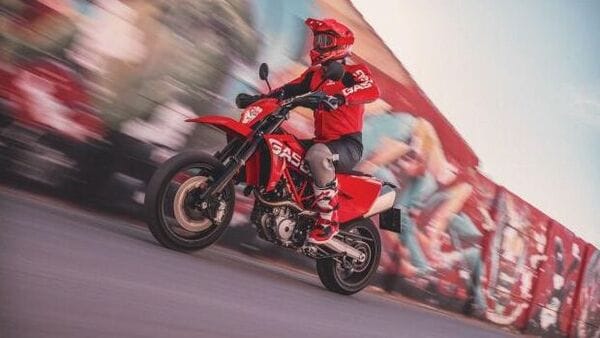 SM 700: Finally a GASGAS you can ride legally on the public roads.

GASGAS has rolled out two new road-spec motorcycles in the form of the all-new ES 700 and SM 700 bikes. GASGAS is known as an off-road specialist for its offerings in the Supermoto, Enduro, and Trail segments. The new announcement of the road-legal bikes comes out as a revelation in its 37-year history, mainly due to a change in philosophy - a move spearheaded by owners Pierer Mobility (KTM).

The new SM 700 and ES 700 by the off-road specialist have been offered as dual-purpose motorcycles featuring KTM’s venerable big-bore single-cylinder 692cc engine. At the centre point of these offerings sit a 692.7cc, liquid-cooled mill that kicks out 73.7bhp of raw power at 8,000rpm. The bikes are also available for A2 license holders with dialed down power. While the SM 700 tips the scales at 148.5 kg (dry), the ES 700 weighs just about a kg less.

Both the bikes sport a long list of features such as lean-sensitive traction control, cornering ABS, an up-down quick shifter, and two riding modes. While the SM rides on 17-inch alloy wheels, the ES 700 rolls on spoke wheels. In terms of exterior styling, both the models look fairly distinctive when compared to their KTM counterparts thanks to the bold red livery with ‘GASGAS’ branding running across the fuel tank and extensions.

The new GASGAS bikes have been slated to reach the European dealerships in the next few weeks. But Indian customers will be disappointed as they are unlikely to be sold in the country anytime soon.

Meanwhile, KTM is said to have big plans for GASGAS, as per previously leaked documents. The company is looking forward to extending the company lineup with its own version of the KTM 390/890 Adventure for more hardcore off-road ability than its Austrian counterparts.