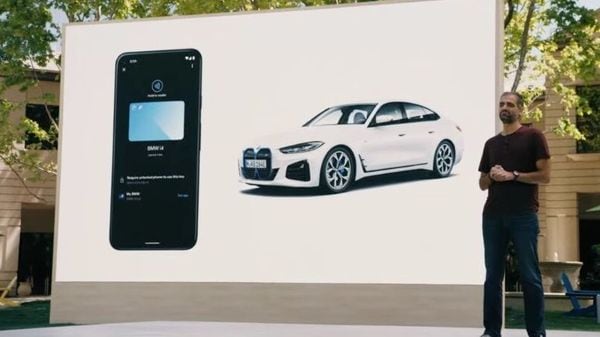 The digital car key can also be shared with a friend when required. Image Courtesy: Google/Screengrab

Google announced at the 2021 I/O developer conference held recently that it is working with BMW and other automakers to come up with a digital key to enable car owners to lock, unlock or start a vehicle using an Android smartphone.

While Google is yet to roll out deeper details on the new feature and how it actually functions, it did inform that the digital key utilises Ultra-Wideband (UWB) technology. For the record, this is a form of radio transmission for which a sensor can tell the direction of the signal, like a radar. This allows the smartphone antenna to identify and locate objects equipped with UWB transmitters. Thanks to this, Android users will be able to lock/unlock their vehicles without taking their phones out.

On the other hand, users with cars enabled with NFC technology, or near-field communication will be able to unlock the car doors by just tapping the phones against the door handles.

In case the car is borrowed by someone else temporarily, Google says that the digital car key can also be shared with another person “remotely and securely".

Goes without saying, the digital key feature will come in handy and may also replace the traditional car keys to lighten your pockets. But it may not be accessible to all, seeing that initially it will be limited only to some high-end devices including Google Pixel and Samsung Galaxy smartphones. Also, carmakers may charge a premium for the introduction of this feature.

As per Google, the digital car key feature is a part of its push to keep smartphones at the centerpiece of consumers’ lives. Thus, its goal can't be achieved without the inclusion of cars. “When purchasing a phone these days, we’re buying not only a phone, but also an entire ecosystem of devices that are all expected to work together — such as TVs, laptops, cars and wearables like smartwatches or fitness trackers," Google’s VP of engineering Erik Kay wrote in a blog post after the latest announcement.

While there was no announcement regarding which specific car models will benefit from this tech, but BMW has been confirmed as a partner. So expect select BMW cars to sport the feature starting from as soon as 2022.