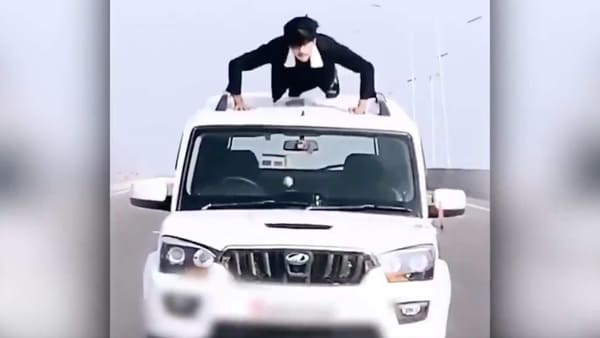 A daredevil stunt atop a moving vehicle has turned a costly affair for a man from Uttar Pradesh. The Uttar Pradesh Police has shared the video of the stunt the person pulled off on top of a moving car, saying that he has been penalised for this act.

The video shared by UP Police shows the man climbing on top of the white Mahindra Scorpio SUV while it is moving on an empty road. The location of the incident is believed to be somewhere in Firozabad.

The man is then seen doing his stunts on the roof of the SUV while the vehicle continues to move. What is more disturbing is that there was no one behind the wheels of the SUV while he was performing his act. And it is still not clear how he pulled it off without a second person inside the vehicle.

The Uttar Pradesh Police swung into action once it got hold of the video. The cops apprehended the person in the video, his father who also is the owner of the Mahindra Scorpio SUV used in the video. The police has charged them with a challan of ₹2,500 for this incident.

Some Pushups will only bring you down in the eyes of Law !

The video also shows the person apologising for his daredevil act on camera. He can be heard saying, "My name is Ujjwal Yadav, and I had made a very dangerous stunt video on top of this car. I will not repeat my mistake in the future."

UP Police has also shared the reaction of Ajay Kumar, SSP Firozabad in the video. He is seen in the video talking about the incident and confirming that the person has been slapped with a fine under Motor Vehicles Act.

The clip ends with an advisory note urging people not to get involved in such stunts and also informing how doing so is a punishable offence.