Dubai Police has some of the most capable vehicles ever made in its fleet.Dubai Police official says the idea isn't to show off but to display the approachable nature of the force towards public at large.
By : HT Auto Desk
| Updated on: 24 May 2021, 09:11 AM 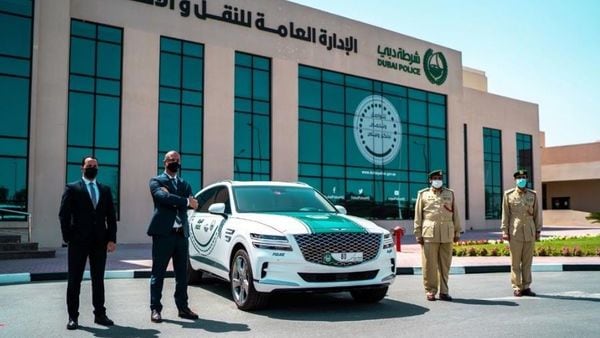 Dubai Police has some of the finest, most capable and ultra luxurious vehicles anywhere in the world. The cops here fight crime and make it look enviable as the official fleet consists of speedy supercars to terrain-conquering SUVs and the latest to join is a 2021 model Genesis GV80. Genesis is the luxury brand of Hyundai and many of its offerings are a firm favourite of the rich and famous.

What makes the Genesis GV80 a capable vehicle with a resume found good enough to find a place in the fleet of Dubai Police is its four-cylinder turbocharged 3.5-litre V6 engine that would make this machine more than capable of outpacing anyone trying to drive away from it. Of course, the long list of Porsche and McLaren cars, apart from a Ferrari and Bugatti would be equally capable, if not more, the Genesis GV80 has quite an intimidating visual profile as well.

The primary idea behind getting a Genesis GV80 in the fleet, as per Brig Mohammad Al Razooqi, director of transport and rescue at Dubai Police, is to have vehicles that are up-to-date. "We are constantly looking for ways to connect with the public. "We're not trying to show off with these cars. Rather, we want to show tourists and residents alike how friendly the police are across the city," he was quoted as saying by the local media in the UAE.

Genesis too highlighted that it is glad one of its models was chosen by the Dubai Police Department. "We are proud to work in harmony with the Dubai Police General Command to support its policing work and maintaining the safety and security of all citizens, residents and visitors in Dubai," said Bang Sun Jeong, head of Genesis Middle East and Africa.