Hyundai Santa Cruz is promising to be a sleek city car while also being a capable machine off the beaten path.A flexible open bed Hyundai Santa Fe can be used to store additional gear.
By : HT Auto Desk
| Updated on: 15 Apr 2021, 04:09 PM 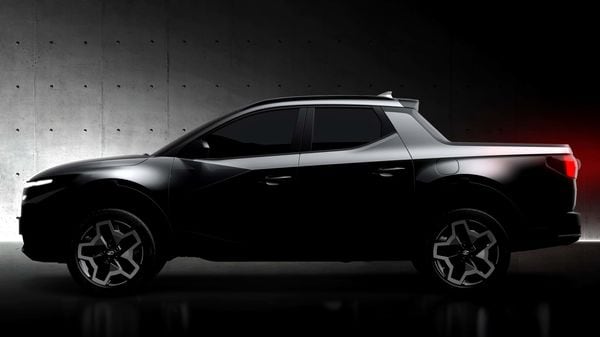 Santa Cruz will be officially revealed by Hyundai on April 15.

Hyundai is all set for the world premiere of Santa Cruz, its first-ever foray into the pick-up truck segment. But to label the Santa Cruz as just another pick-up in the lucrative US market may not be what Hyundai wants because the Koreans are promising a lifestyle product and claim that the Santa Cruz will seek to be an adventure lifestyle vehicle that is as much at ease within cities as it is beyond.

Hyundai Santa Cruz has a lot riding on its sporty shoulders considering the surge in demand for pick-up vehicles in the US market in recent times. To be manufactured at the company's facility in Alabama, the car is being positioned as an adventure vehicle that is likely to appeal to a younger audience.

Numerous sketch reveals in the past have given a glimpse at what one can expect from the exterior design of the Santa Cruz. This includes a large grille at the front, LED head lights and large alloy wheels. There is also a flexible open bed on the car which can be used to store additional gear.

Being a Hyundai, expect Santa Cruz to be packed with features in the cabin. Open-bed flexibility coupled with closed-cabin security meets the changing everyday needs of its adventure-oriented buyers, while powerful and efficient engines and superb maneuverability ensure it is a pleasure to drive in urban or off-road environments," says Jose Munoz, President and CEO, Hyundai Motor North America.

Hyundai has thud far made no revelations about what's under the hood but if the Santa Cruz has to compete in a space which is currently dominated by the likes of Ford F Series, Chevrolet Silverado, GM Sierra and RAM, it will have to ace the power game as well.