Ford Motor's India facility in Chennai has rolled out the last of the vehicles to be exported abroad. The plant now faces closure with formal handover to Tata Motors.
By : HT Auto Desk
| Updated on: 22 Jul 2022, 11:40 AM 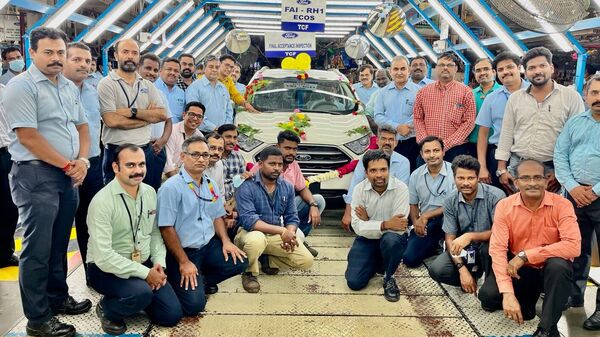 The last of the Ford EcoSport SUV models rolled out of the Maraimalai Nagar manufacturing facility of the carmaker earlier on July 20.

Ford Motor has rolled out its last vehicle from its India facility in Chennai. The Maraimalai Nagar manufacturing facility saw the last car, a Ford EcoSport, roll out of the assembly lines, marking the end of an era for the US-based carmaker. Ford India had earlier announced a formal closure of the facility by the end of this month. It has about a week to settle all issues with its workers, who had been protesting against the separation packages offered by the carmaker till earlier this month.

Ford employees in India, specifically those who have been working at the Chennai facility, had been protesting against the company's separation policies. They have been demanding better severance package as they face an uncertain future ahead. Since May this year, more than 2,000 workers went on strike demanding better compensation. Some of the Ford India employees at the facility complained that the negotiations with the car manufacturer has been very slow.

Couple of weeks ago, a section of the protesting employees agreed to continue to work while pursuing discussions with the Ford management on the severance packages for employees. Till the report is filed, there is no confirmation on whether the two sides have reached any final settlement yet.

According to reports, Ford India agreed to tweak the severance package to offer more to its employees. Instead of 115 days, the company will offer separation package to employees who have worked for an average of 121 days. Ford India also reportedly agrees to protect wages and employment of employees who will continue to work at the facility until July.

Ford India decided to stop making cars in the country last year after incurring heavy loss over the last one decade. Ford Motor's journey in India began in the 1920's when it came to the country as a subsidiary of Ford Motor Company of Canada, before exiting in the early 50's. In 1995, Ford returned to India in collaboration with Mahindra and Mahindra. In 1998, Ford severed ties with Mahindra and started to operate as Ford Motor India Limited till the end.