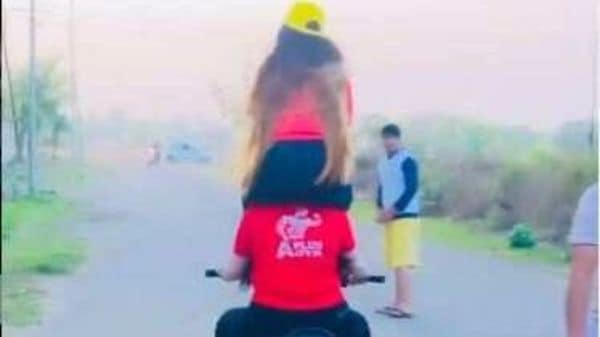 Two women bikers have been fined by Gaziabad Police for performing a stunt on a Royal Enfield motorcycle wherein one of them was sitting on the shoulders of the other who was riding the bike.

The police sent a challan of ₹11,000 against the two women after taking cognisance of their social media video of the bike stunt that went viral. In the video, social media influencer Shivangi Dabas was seen sitting on the shoulders of wrestler Sneha Raghuvanshi as she drove the bike near Govindpuram.

“We wanted girls to do something unique and hoped to inspire others. We did not mean to have a negative influence on others," Rajvanshi was quoted as saying in a report by Hindustan Times (HT). In her defence, Dabas said, "We did not perform stunts on the highway. In our videos we have cautioned people from attempting such acts."

In another video of the same nature, three women were seen tripling on a bike without wearing helmets. The vehicle had a Delhi registration number. The owner of this motorcycle, also a Royal Enfield, was fine ₹17,000. "The rider rode dangerously without holding the motorcycle’s handle at one point. The woman riding the motorcycle in the previous case was also seen in the second video," Ramanand Kushwaha, superintendent of police (traffic), told HT.