Tesla shares: Elon Musk has lots of reasons to dance 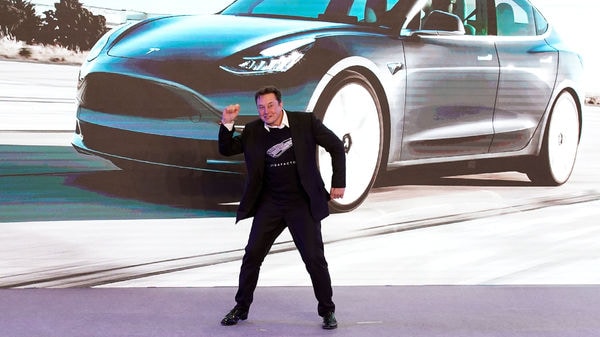 Elon Musk has lots of reasons to dance.

Tesla Inc. shares have been on a tear since October, when the electric-vehicle maker posted a surprise third-quarter profit and said its Model Y will launch months ahead of schedule. After surging to another record close Tuesday, the stock climbed as much as 4.2% on Wednesday, boosting the company’s market value to more than $88 billion -- more than Ford Motor Co. and General Motors Co. combined.

A bit more good news could push it to $100 billion -- the threshold that will unlock the first tranche of Musk’s all-or-nothing moonshot award. On paper, it will net him about $346 million. A Tesla representative didn’t respond to a request for comment.

Musk, whose $29.3 billion fortune is mostly tied up in Tesla stock, has had a spring in his step lately. He danced on stage Tuesday at Tesla’s factory outside Shanghai to celebrate delivering the first Model 3 sedans to public customers in China. He spent New Year’s Eve at the company’s car-assembly plant in Fremont, California, closing out a quarter in which Tesla delivered a record 112,000 cars.

It’s a sharp reversal from mid-2019, when the shares languished as Wall Street grew increasingly skeptical about consumer demand and Musk called for a “hardcore" review of expenses after cutting thousands of jobs.

Musk’s pay package is believed to be the largest executive compensation deal in history. It’s structured the same way as his two previous pay plans, consisting of a trove of stock options that vest in increments if ambitious goals are met.

But the size and scope of the most recent award is unprecedented. It outlines plans for Tesla to grow its market value to $650 billion and increase revenue and adjusted earnings by multiples. At stake for Musk is 20.2 million options that could net him more than $50 billion if all targets are met, according to Tesla’s estimates. He gets no salary or bonuses.

The pay plan drew sharp criticism from shareholder-advisory firms but was approved by an overwhelming majority of Tesla investors in March 2018.

Within a year, the company achieved two of the milestones for Musk’s award: it brought in more than $20 billion in aggregate revenue over four quarters and booked more than $1.5 billion in adjusted earnings before interest, taxes, depreciation and amortization over that span. It also said the next Ebitda threshold --$3 billion -- is within reach.

For Tesla to achieve a $100 billion market value, its stock must climb to $554.80, based on the current number of shares outstanding. But it’s not a one-day event: the terms of Musk’s award require that both the six-month trailing share price average, as well as the 30-day trailing average, exceed that figure before the first tranche of options is released.

The tranche consists of 1.69 million options that would net Musk around $346 million if he exercised them and sold the shares immediately at the threshold share price, which could be a welcome payday for a billionaire who told a jury last month that he’s short on cash.

However, that’s an unlikely scenario. He hasn’t sold a single share of Tesla for years, apart from unloading $593 million of stock in 2016 to pay income taxes.