France slashes speed limit for vehicles in Paris to just 30 kmph. Here is why

It is not a new thing in France. Besides capital Paris, there are few other French cities and towns which also have limited speeds of vehicles to 30 kmph.
By : HT Auto Desk
| Updated on: 30 Aug 2021, 04:34 PM 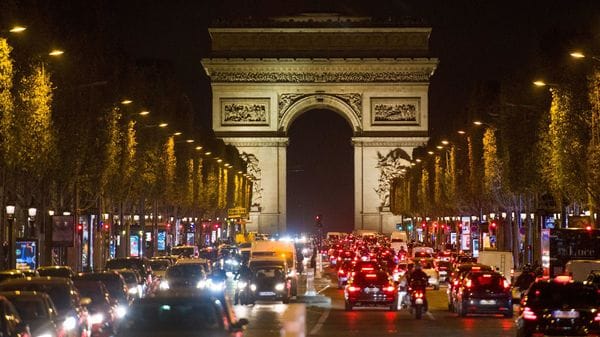 File photo of vehicles plying in front of the Champs Elysees in Paris, France.

France has implemented a nationwide maximum speed of 30 kilometres per hour from today. The new rule applies to almost all streets of the French capital Paris. Violating this rule will be quite expensive for vehicle owners, as the authority is instructed to slap fines of at least 90 euros.

As of Monday, motorists and drivers of two-wheelers will have to slow down to travel in the French capital. However, there will be exceptions on certain sections of Paris, like the Marshals or the Champs-Elysees, where speed limit remains 50 kmph.

The decision has been taken in an attempt to reduce accidents and making Paris more pedestrian-friendly. Before the new rule was implemented, Paris already had around 60 per cent of its roads where speed of vehicles were limited to 30 kmph. According to surveys, the average speed of vehicles in some of the most congested streets of Paris does not exceed 16 kmph currently.

The decision has left a large section of vehicle owners in the French capital fuming. Commercial vehicle drivers said that this will not only result in longer waiting times for customers, but will also shoot up rates of cabs and hurt business.

Under Socialist Mayor Anne Hidalgo, the Paris city government has already restricted or banned vehicle traffic on several streets and multiplied the number of bike lanes. Besides trying to reduce accidents or providing more space to pedestrians and cyclists, Hidalgo backs the rule as it promises to improve the city's air quality. She had named Spain as a model to reduce the chaos of inner-city traffic.

With the new speed limit of 30 kmph, Paris has joined a list of other French cities, such as Lille, Montpellier, Grenoble, Nantes and Rennes where similar rule already exists. In other parts of Europe, Lausanne in Switzerland or Hamburg, Bremen, Munich and Berlin in Germany also have similar speed limits for vehicles.