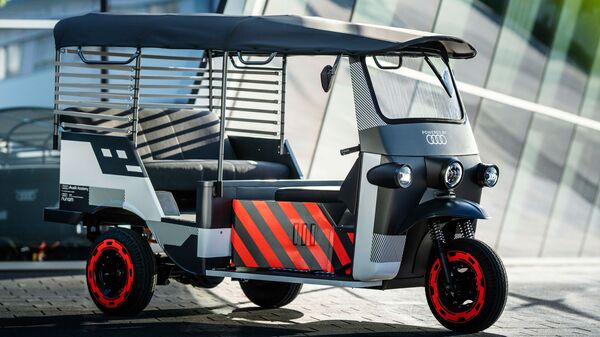 Audi e-Tron battery modules have been getting a second life in India and powering the e-rickshaws in the country, claimed the automaker in a release. As it claimed a German-Indian startup Nunam has brought three electric rickshaws that are powered by used batteries taken from test prototypes of the Audi e-Tron luxury EV. The German luxury car manufacturer claims the aim of this project is to explore how used battery modules made with high-voltage batteries can be given a second-life use case after their car life cycle.

Audi also claims that this will strengthen job opportunities for women in India in particular, as they will be provided with these electric rickshaws to transport goods. Initially, the startup has developed three prototypes of these e-rickshaws with used Audi e-Tron batteries and there are more to be built. It has further informed that these e-rickshaws powered by second-life Audi e-Tron batteries are slated to hit the Indian roads in a pilot project in early 2023.

The startup co-founder Prodip Chatterjee claims these old batteries are extremely powerful even if their car lifecycle is over. “When used appropriately, second-life batteries can have a huge impact, helping people in challenging life situations earn an income and gain economic independence – everything in a sustainable way," he further added. He also added that “Car batteries are designed to last the life of the car. But even after their initial use in a vehicle, they still have a lot of their power."

It has been widely discussed if the high-energy-density EV batteries can be used for a second life in vehicles with lower range and power requirements, as well as with lower overall weight. This comes as one of the use cases proving that concept is feasible.