Volkswagen has announced the name of the new sporty SUV Coupe, which will be unveiled very soon.Taigo has a dynamic and exciting design combined with advanced technological features.
By : HT Auto Desk
| Updated on: 30 Mar 2021, 03:53 PM 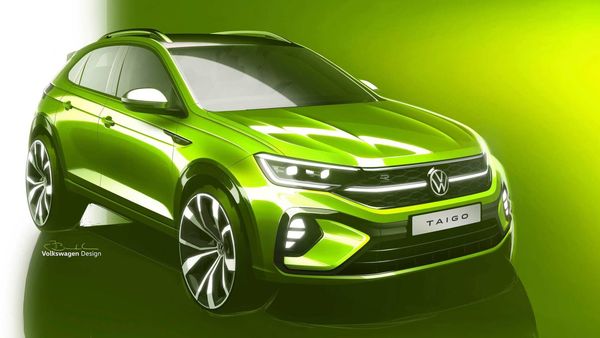 Volkswagen to expand its SUV range with the new Taigo SUV.

Volkswagen has announced the name of the new sporty SUV Coupe. Called the Taigo, the new SUV will be packed with advanced technological features with a dynamic design.

Volkswagen has offered a first look at its new sports coupe SUV of the model's official European premiere. It is expected to be launched at the end of the year.

Taigo , which will be included in Volkswagen's new SUV model family in the small segment, stands out as a sporty crossover model. The Volkswagen Taigo joins the growing CUV (Crossover Utility Vehicle) segment that combines elevated seating positions with what the brand calls a 'sporty coupe silhouette'.

The new model, with a dynamic and impressive design, will be offered for sale with economical TSI engine options, standard LED headlights, fully digital cockpit and multi-functional driving assistance systems.

"It impresses with an emotional and dynamic design. The new model also comes with a multitude of state-of-the-art connectivity and assistance systems," claimed Volkswagen in a statement released along with some of its sketches.

The Taigo SUV is going to be the European version of Volkswagen's Nivus model, which was successful in Brazil. Both cars will be based on Polo’s MQB A0 platform. The German auto giant has confirmed that the Taigo will be produced in Pamplona, Spain, for the European market.

Though Volkswagen has not revealed too many details about the upcoming Taigo SUV, there are certain things that will remain similar to the Nivus SUV. For instance, the 1.0-litre TSI engine which can churn out 116 PS of maximum power and 200 Nm of maximum torque.

Volkswagen has not given a hint whether there will be an electric version of the Taigo SUV, given the emphasis the carmaker has been giving on electrification of late.