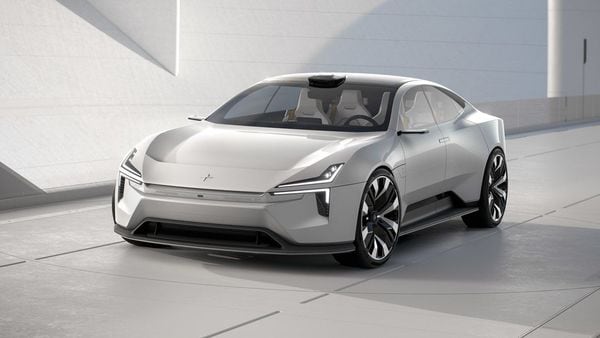 As automotive brands prepare for the upcoming Geneva Motor Show, or plan to follow the current trend and skip it altogether, Volvo’s luxury marque unveiled a new all-electric concept vehicle a week ahead of time during a live video broadcast on Tuesday.

Details remain scarce about the Polestar Precept, but released renderings indicate a very low and sleek silhouette with an emphasis on leg- and headroom in the rear. The four-door, fully electric grand tourer looks like a cross between a sport wagon and large touring sedan—and a possible contender against the front-running Porsche Taycan and Tesla Model S. The press will get an in-person look during the company’s press conference at noon, March 3 in Geneva; the show is open to the public starting March 7.

Like all concepts, the Precept is meant to present “a vision of the company’s future vehicle aspirations," which apparently means more smart screens, less dumb mirrors. Camera units set on an aerodynamic arm replace side mirrors; a digital screen with a camera feed replaces the traditional rear-view mirror. There’s also a 15-inch center touch screen and 12.5-inch driver display at the front of the vehicle.

Running it all will be novel human-machine interface technology developed in close collaboration with Google and built for their Android platform. Key to the new system is “eye-tracking," which can sense where the driver is looking at any given time and adjust the different in-car displays accordingly. The other component is “screen proximity," which means that when the screen senses that a hand is coming toward it, it becomes brighter, displays more information, and enlarges buttons and sliders. With the Precept, Polestar seems to be addressing the problems of distracted driving rather than diminishing the act of driving itself with autonomous systems.

The Precept concept was built mostly in Sweden with a 10.2-foot wheelbase and a large battery pack underneath it. The front grille, which in conventional cars channels air to radiators and the engine, has been replaced with driver assistance systems and safety sensors such as two radars and a high-definition camera. The typical rear window has been eliminated altogether, allowing the glass roof to extend beyond the rear seats down to the tailgate.

The interior dispenses with the wood/leather/chrome treatment of today’s luxury cars. Instead, high-tech flax-based composites on interior panels and seat backs save 50% in weight (more range!) and use 80% less plastic (less shame!) than conventional materials. The seat surfaces are 3D-knitted from recycled bottles; the bolsters and headrests are made from recycled cork vinyl; the carpets are made from reclaimed fishing nets. You could imagine Greta Thunberg driving one away with a smile.

Polestar launched in 2017 with the Polestar 1, a 609-horsepower hybrid with an electric-only range of 124 km (77 miles), the longest of any hybrid car in the world. In Feb. 2019, the company’s Polestar 2, a fully electric luxury fastback, was announced with pricing targeted at the bestselling Tesla Model 3. An electric SUV called the Polestar 3 is expected in 2021.