Powered by a V12 engine, Ferrari Purosangue SUV is a statement of intent signaling evolution in a world preferring larger body types. But Ferrari is shying away from terming the car as an SUV.
By : Paarth Khatri
| Updated on: 14 Sep 2022, 08:57 AM
Ferrari Purosangue is an ultra exclusive sports SUV meant for select production numbers for the exclusive few who can eventually afford it.
View all Images

1/4
The interior of Ferrari Purosangue gets dual screens that are inspired by SF90 Stradale.

2/4
Ferrari Purosangue gets a naturally aspirated V12 engine that puts out 715 hp and 716 Nm. It is mated to an 8-speed dual-clutch automatic transmission.

Ferrari Purosangue has finally been revealed as the first SUV from the iconic sports car makers in a world largely moving towards a larger body type in vehicles. Slated to take on rivals like Bentley Bentayga, Lamborghini Urus, Maserati Levante, Porsche Cayenne and Aston Martin DBX, the Ferrari Purosangue SUV will be eventually manufactured in limited numbers as the company looks to maintain an exclusive clientele.

The Ferrari Purosangue isn't exactly following the bulky or boisterous body types and instead, leans on a crossover SUV design philosophy. The first-ever four-door, four-seater vehicle from Ferrari, the Purosangue is a manifestation of global trends that are leaning towards an SUV body type. While purists may have been averse to the idea of a sports car maker leaning towards the SUV body form, Ferrari appears to have struck a balance between a low-slung vehicle and a car that also has dominant road presence. For Ferrari though, the terminology may be muted. “We aren't calling it an SUV. We’re not even talking about SUVs" said Benedetto Vigna, Ferrari CEO. 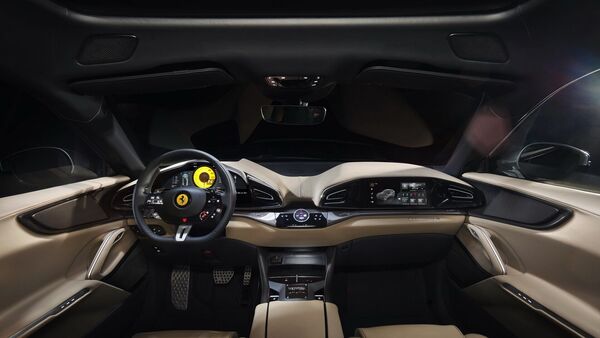 A look at the cabin layout inside Ferrari Purosangue SUV.

How many can Ferrari Purosangue seat?

Ferrari Purosangue may be from the makers of some of the most acclaimed sports car models but it can seat more than just two. The latest from Ferrari can seat four with two bucket seats at the back and the rear side doors open at a 79-degree angle for easier entry and exit for passengers. The wheelbase of 3,000 mm of wheelbase allows decent levels of leg space for back-seat passengers. And there also is some cargo space at the very back - at around 470 liters.

How much power does Ferrari Purosangue pack?

Ferrari Purosangue is powered by a 6.5-litre V12 engine which produces 715 hp and offers 715 Nm of torque. This makes Purosangue the most powerful vehicle from the Ferrari camp in terms of engine output. In fact, 80 per cent of the torque comes in at just 2,100 rpm. The all-wheel drive powertrain has the front drive unit disengaging at fourth gear or at 200 kmph. Capable of hitting 100 kmph in just 3.3 seconds, the top speed of Ferrari Purosangue is at 310 kmph.

How much does the Ferrari Purosangue cost?

Ferrari Purosangue is expected to be manufactured in exclusive numbers with the company clarifying previously that it isn't exactly chasing sales figures with the model. That said, the expected price tag of around $400,000 is likely to ensure that only the elite among the wealthiest of buyers can afford to add it to their respective garage.