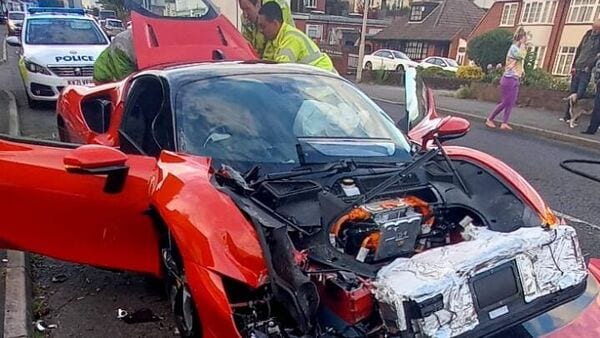 The front side of the Ferrari SF90 hypercar cannot be recognised after the accident.

The incident took place in the evening and reportedly no one has been injured in the crash. It is not known how fast the Ferrari SF90 Stradale was travelling when the accident took place. Haden Cross Fire Station shared the pictures of the destroyed Ferrari on Twitter with a caption stating, “RTC Hagley Road, Halesowen- White Watch attended. Please be careful when out and about." A few commented on the accident where one reportedly said the individual's house costs less than the damaged Ferrari SF90 hypercar.

As per reports, a spokesperson from West Midlands And Staffordshire Fire and Rescue said, “We were called by the police to reports of an RTC. Once car ended up in a collision with a number of parked vehicles." The officials left the scene of the incident in the late evening.

A Ferrari SF90 Stradale is one of the fastest cars and features a four-litre twin-turbo V8 with three electric motors. The hypercar can touch the speed of 100 kmph in a mere 2.5 seconds and offers a top speed of 339 kmph. This luxury hypercar from Ferrari is the first-ever Ferrari to feature PHEV (Plug-in Hybrid Electric Vehicle) architecture combined with an internal combustion engine.