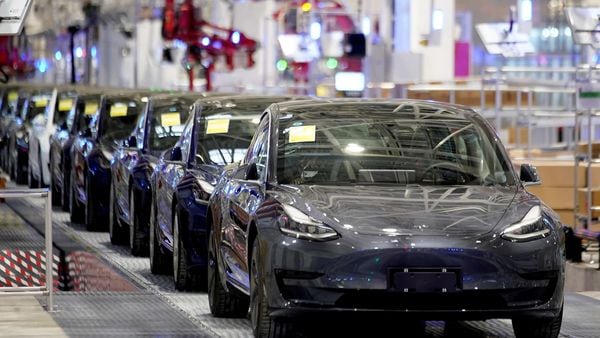 FILE PHOTO: Tesla China-made Model 3 vehicles are seen during a delivery event at its factory in Shanghai,

Tesla Inc. is cutting prices of cars sold in China for a second time this month as competition starts to heat up again in the world’s largest electric-vehicle market.

The reduction applies to the long-range version of the locally built Model 3, lowering the sticker price by about 20,000 yuan ($2,818), a company representative said Thursday. The cut of about 6% would make up for a rebate that is going away later this year, meaning consumers would continue to pay 344,050 yuan for the car, the representative said.

The move may help Tesla stay competitive against Daimler AG, Volkswagen AG, General Motors Co. and other rivals as car demand in China gradually recovers from a slump worsened by the coronavirus outbreak. The price of the entry-level Model 3 was reduced to below 300,000 yuan this month to qualify for the latest state subsidies.

The longer-range variant, which can run more than 660 kilometers (410 miles) on one charge, still won’t qualify for the government’s latest handouts for electric-car buyers because the discounted price would be above the maximum threshold to qualify. The entry-level standard version Model 3 now costs 271,550 yuan after subsidies.

A decline in car sales in China is easing, fueling optimism that the world’s largest auto market is rebounding after the country largely controlled the virus pandemic that shut down much of its economy. Yet registrations of locally built Tesla vehicles fell more than 60% in April from a month earlier, according to data from state-backed China Automotive Information Net, showing a sustained recovery is still far from certain.

Tesla started production at its new Shanghai plant, its only car factory outside the U.S., with shorter-range Model 3 variants around the start of the year. The plant is now adding the longer-range versions to its production.

The company suspended output in Shanghai earlier this month for what it called “normal maintenance work." The plant has now resumed operation, people familiar with the matter said, without specifying whether it is running at full capacity. Tesla is also in the process of resuming output at its sole U.S. car-assembly plant.