The 14th National Toyota Dream Car Art Contest was held in different countries and regions between June 2020 and February 2021.Since its inception in 2004, as many as 6.2 million children from 100 countries/regions have participated in the contest globally.
By : HT Auto Desk
| Updated on: 24 Mar 2021, 10:30 AM 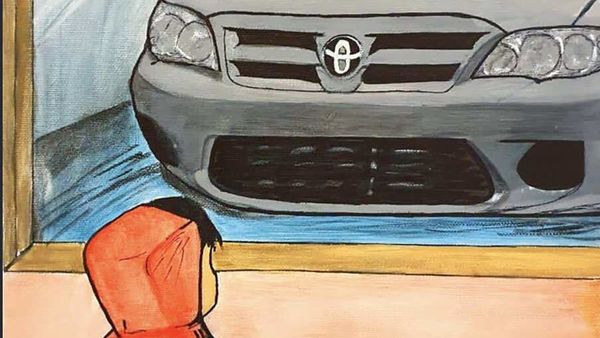 Toyota Motor has announced finalists for its 14th National 'Dream Car Art Contest' in regions of Middle East. At least three of these include refugee children from Jordan who created innovative and thought-provoking artwork.

The UN Refugee Agency in Jordan shared the art pieces of the refugee children while congratulating them on the achievement. One of the art works includes an amphibious car that can "dive into the deepest oceans to learn the secrets of the other worlds". This car has a fish-like rear tail and a pointed front profile.

The other drawing is quite colourful and of a futuristic flying car that shows a family of four inside it with all their luggage tied to the car's roof. The car seems to be gliding past tall buildings to reach its destination. Bye-bye to aeroplanes?

A car to return to home to Syria

Congratulations to all the refugee children who are finalists in @Toyota dream car drawing competition https://t.co/gbw1Cz0z3B pic.twitter.com/ZX7j8HegBV

The third drawing shows a child looking at a Toyota car in a painting. This has been interpreted as "the future's ambition". The drawing embodies "the pains inside (the creator) and (his) dream of reaching safety and a bright future".

The final drawing shared by the UN agency is about "a car to return to home to Syria". The portrait reflects strong emotions for home and shows Toyota as a life-saviour and brings the child back to family.

The 14th National Toyota Dream Car Art Contest was held in different countries and regions between June 2020 and February 2021. This will be followed by a World level competition from March onwards where winners from different national contests will get a chance to showcase their respective countries.

The competition was first held in 2004 as part of Toyota's social contribution initiatives. As many as 6.2 million children from 100 countries/regions have participated in the contest globally since its inception. In 2019 alone, the competition saw about 9,50,000 entries from 86 countries and regions around the globe.

Toyota believes that its creative initiative encourages children to put forward their innovative ideas in 'car' form. This helps them start the process of delivering actionable change alongside the company.