Hyundai Motor India’s managing director and chief executive, S.S. Kim admits Xcent may have not given a stiff fight to Dzire from Maruti or Amaze from Honda but the Aura may change all of that.
By : Amit Panday
| Updated on: 14 Jan 2020, 08:48 AM 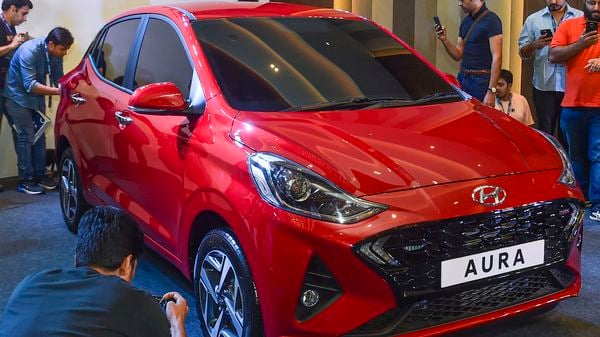 Hyundai Motor India Ltd hopes a new compact or sub-four-metre sedan that it will introduce next month will let the automaker step up its position in the segment where it trails Maruti Suzuki India Ltd and Honda Cars India Ltd.

With Maruti announcing plans to exit the diesel vehicle segment once Bharat Stage VI (BS-VI) emission norms kick in from April, Hyundai, India’s second-largest carmaker, believes it will be better placed to make deeper inroads in the segment.

Maruti, India’s largest carmaker, sells more than 16,000 units of its Dzire compact sedan each month, with the diesel model contributing 35-40%. Hyundai, which currently sells the Xcent compact sedan, will offer the new Aura sedan with three BS-VI compliant engine options—1 and 1.2-litre petrol and a 1.2-litre diesel, as well as a CNG variant.

Hyundai Motor India’s managing director and chief executive, S.S. Kim, spoke to Mint on the strategy with the Aura, its positioning, focus areas and dealer financing. Edited excerpts from an interview:

Sub-four-metre cars have grown to more than double in market size in the last 10 years but continue to comprise 60% of total passenger vehicles sold in India. Will Hyundai continue to focus on this segment?

However, young customers are looking at many innovative features in the same segment such as Bluelink (Hyundai’s artificial intelligence-enabled features for connectivity and safety), wireless charger and air purifier. Packaging these helps us maintain premium perception among customers.

When we prepared the basic product concept, designed and developed Aura, it was 100% based on Indian market feedback. However, Aura will be a global product wherein it will be exported as well.

What is it that Hyundai is aiming with Aura?

I don’t think Hyundai Xcent has performed strong enough to compete with Maruti Suzuki Dzire and Honda Amaze in terms of volumes and customer perception. The existing Xcent model just focuses on the fleet segment but does not appeal to buyers for personal segment. So, we felt we must develop a strong product that can appeal to this segment, which is large in size and has seen stable demand over the years.

What volumes do you expect from Aura in the first year?

I won’t comment on that but will give you an idea of what we are expecting. Maruti sells about 15,000 Dzire cars per month and Honda sells 5,000 Amaze models per month. Although we are the second-largest carmaker in India, our presence in this segment is not strong. We want to build it and our volume plan is based on that strategy. The 1.2-litre Ecotorq diesel variant of Aura will fill in for the demand that will be left vacant by the other car manufacturer (Maruti) under BS-VI mandate. With that, this will be the only 1.2-litre BS VI diesel engine in the compact sedan segment. That’s also a sweet spot going forward for us.

How are dealers placed in terms of available financing options?

We have improved a lot. Our dealers too have faced the same situation the industry has seen in the past year. As an OEM, we have implemented various measures. I have visited Mumbai many times this year to meet the bankers to present our long-term plan, product road map and investment plans.

It’s not that bankers are averse to lending to the industry but because of the market situation, they have devised certain (lending) principles. The finance minister has also given impetus to the banking structure and that’s why you see that now the banks have started holding many camps offering loans to strong players. During my interactions with the bankers, I suggested to the management that we could set up new protocols and processes acceptable for both the parties (banks and the auto dealers). A lot of dealers were found to be diverting funds, raised as loans for automobile business, into other areas. That’s one of the reasons why banks were not happy with the automobile business but this is improving now.

What is the status of liquidation of BS IV stock?