The container ship is as long as Empire State Building is tall. Stuck in Suez Canal, it is blocking passage of at least a dozen ships.
By : HT Auto Desk
| Updated on: 25 Mar 2021, 11:13 AM 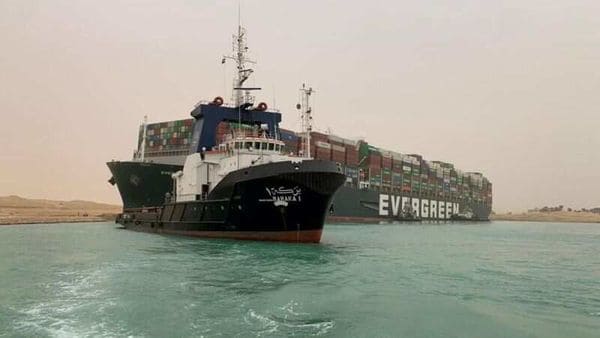 A container ship which was hit by strong wind and ran aground is pictured in Suez Canal, Egypt.

A humongous ship stuck in the Suez Canal could have a massive impact on global oil prices with experts warning it could be catastrophic for world trade. The 200,000 ton ship, which is 1,300 feet long, has been stuck here since early morning hours of Tuesday has already blocked passage of multiple ships looking for a way forward from here.

The container ship is currently stranded sideways at the Suez Canal after strong winds reportedly grounded it. Efforts to move it - a long line of tug boats have been deployed -have thus far been unsuccessful with reports suggesting at least one dozen other ships waiting for a way past it along the 200-kilometre waterway that is crucial for international shipping.

It is highlighted that the longer the duration of the impasse, the more likely it would be that refiners look elsewhere for supplies. Multiple reports suggest that millions of barrels of oil in other ships waiting for passage are delayed, one of the key reasons why brent crude prices have jumped. This could, in turn, impact fuel prices, especially in countries which import all or most of their requirements.

Around 50 ships of varying sizes pass through the Suez Canal each day and it accounts for around 10% of world's trade. As many as 19,000 ships passed through here in 2020 alone. Any minor disruption in operations here has the potential of far reaching impact but a major one like what's currently being witnessed is expected to have mammoth ramifications.

If efforts to pull the ship out of its predicament continue to be unsuccessful, shipping companies may have to consider alternate routes - possibly around Africa - which would not only be a more expensive proposition but one that would also result in delays.