The Delhi Traffic police appealed to its citizens to not only follow the Covid-19 precautions but also to take alternative routes as several borders remain closed amid farmers' protests.
By : ANI
| Updated on: 03 Jan 2021, 02:28 PM 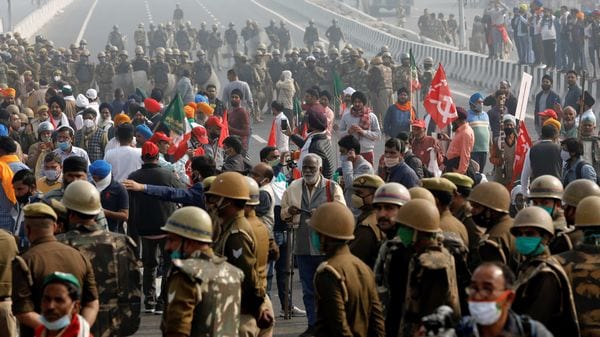 Farmers block a highway as police officers stand guard during a nationwide strike against the newly passed farm bills at the Delhi-Uttar Pradesh border in Ghaziabad.

In view of the ongoing farmers' agitation at the gates of the national capital, the Delhi Traffic Police on Sunday appealed to citizens to take alternative routes as Chilla and Gazipur borders remained closed due to the protests.

While Tikri and Dhansa borders were closed for any traffic movement by police and Jhatikara border is open only for LMV (Cars/ Light Motor Vehicles), two wheelers, and pedestrian movement.