After two decades of explosive growth, Chinese auto sales fell 4.1% in 2018 as unease over the tariff war with President Donald Trump and slowing economic growth prompted consumers to put off big purchases.
By : AP
| Updated on: 14 Jan 2020, 10:17 AM 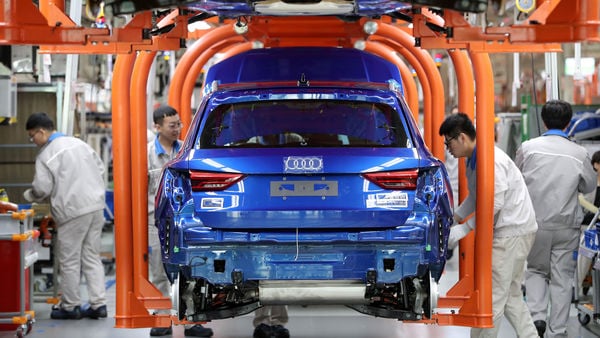 China's auto sales fell for a second year in 2019 as a trade war with Washington and an economic slowdown depressed consumer confidence and demand for electric vehicles weakened, an industry group reported Monday.

The downturn is squeezing global and Chinese automakers that are spending billions of dollars to meet government mandates to sell electric vehicles.

Sales in the industry's biggest global market declined 9.6% from 2018 levels to 21.4 million sedans, SUVs and minivans, according to the China Association of Automobile Manufacturers.

Total vehicle sales, including trucks and buses, was off 8.2% at 25.8 million.

After two decades of explosive growth, Chinese auto sales fell 4.1% in 2018 as unease over the tariff war with President Donald Trump and slowing economic growth prompted consumers to put off big purchases.

Forecasters expect sales to level off this year, but that would be more than 3 million units below 2017’s peak of 24.7 million.

December sales were off 0.1% from a year earlier, CAAM said, an improvement over double-digit declines in previous months. The group gave no December sales total, but based on other CAAM data it would be about 2.2 million vehicles.

Sales of electric and gasoline-electric hybrid sedans and SUVs in 2019 sank 4% from a year ago to 1.2 million. That still would make China the technology's biggest market by far, accounting for at least half of global purchases.

Electrics sales rose by double digits in early 2019 but plunged after Beijing ended subsidies to buyers in July. Regulators shifted the burden of promoting the technology to automakers by imposing mandatory sales targets.

Communist leaders are trying to accelerate industry development by ending curbs on foreign ownership of automakers.

Limits on foreign ownership are to be removed from the whole auto industry by next year.

Despite those changes, most foreign automakers are expected to stay in joint ventures with Chinese partners to take advantage of their government connections.

General Motors Co. said earlier 2019 sales by the company and its Chinese partners fell for a second year, declining 15% to just under 3.1 million vehicles. GM sales in China peaked at just over 4 million units in 2017.

Sales by Chinese brands tumbled 15.8% over 2018 to 8.4 million vehicles. More than half of that was accounted for by sales of lower-cost Chinese SUVs, which sank 4.2% to 4.9 million.