Bharat Bandh: Road, rail transport could likely be affected in parts of country

Bharat Bandh or nationwide strike called by Samyukta Kisan Morcha will remain in place till 6 pm on Friday.Delhi Police has said that it has made adequate security arrangements in wake of the strike.
By : HT Auto Desk
| Updated on: 26 Mar 2021, 12:55 PM 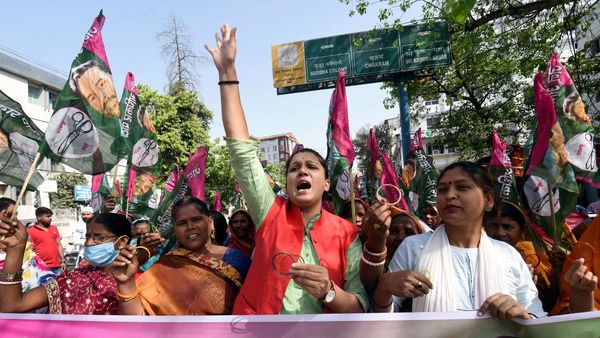 Patna: Jan Adhikar Party supporters raise slogans as they participate in a protest in support of a nationwide strike, called by farmers' unions against the three farm laws, in Patna, Friday, March 26, 2021.

Road and rail transportation are likely to be affected in various parts of the country till 6 pm on Friday as farmers have called for 'Bharat Bandh' to mark four months of their protest against the Centre's three agri laws.

The 12-hour bandh started at 6 am and has been called by the Samyukta Kisan Morcha (SKM) or Samyukta farmers union - an umbrella body of protesting unions. "All minor and big roads and trains will be blocked. All services will remain suspended except for ambulance and other essential services. The effect of Bharat Bandh will be observed inside Delhi as well," SKM said.

Though the blockade has been called across the country, its impact has majorly been in the northern states of Punjab and Haryana and Delhi. Several highways and roads in Punjab and Haryana including in Bathinda, Ludhiana, Amritsar, Patiala, Mohali, Rohtak, Jhajjar and Bhiwani districts, have seen gathering of farmers. As per police, some protesters have also blocked the Ambala-Delhi highway near Ambala Cantt.

Shutdown was also seen in Andhra Pradesh where members of Left parties held demonstrations while a rally will be organised at National Highway-16 connecting Kolkata and Chennai, as per ANI.

Farmer protesters have also blocked rail services at locations across Punjab and Haryana by sitting on tracks. They have made appeals to trader associations to close their shops during the nationwide shutdown so as to support the bandh. Further, the farmers' union said that various trade unions, student organizations, political parties, bar associations and state government representatives are providing their support to the bandh.

Delhi Police has said that it has made adequate security arrangements in wake of 'Bharat Bandh’. Taking to Twitter, it said that the Ghazipur border has been closed for traffic movement. However, major impact of the bandh will be witnessed in Punjab and Haryana, a farmer leader said.

The Confederation of All India Traders (CAIT) that eight crore traders that come under its ambit will not participate in the bandh and will keep shops opens throughout the day. "Markets will remain open in Delhi and other parts of the country. The ongoing deadlock can be resolved only through dialogue process," CAIT said.

Thousands of farmers, mostly from Punjab, Haryana and western Uttar Pradesh have been protesting at different borders of Delhi - mainly Singhu, Ghazipur and Tikri - since late November last year. SKM has urged "protesting citizens" to make the bandh successful but by remaining peaceful.