The launch of Volvo XC40 Recharge, which will be the Swedish carmaker's first electric vehicle in India, was earlier delayed due to the Covid-19 pandemic.
By : HT Auto Desk
| Updated on: 04 Jul 2022, 14:08 PM 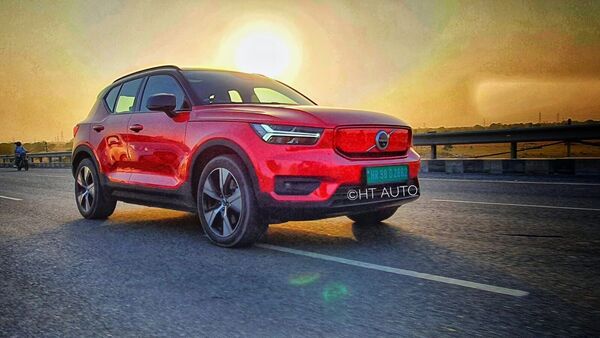 Volvo Cars will launch the XC40 Recharge SUV, its first electric car in India, on July 26.

Volvo Cars will launch the XC40 Recharge SUV, its first electric car in India, on July 26. The launch, which was earlier scheduled for last year, was delayed due to the Covid-19 pandemic. Volvo Cars recently took the covers off the XC40 Recharge, the electric avatar of its existing XC40 SUV, in India earlier this year. The XC40 Recharge will be be locally assembled in India, as announced by the Swedish carmaker earlier.

Local assembly of the Volvo XC40 Recharge could bring down the cost of the EV by some margin. Volvo is expected to open the bookings for the XC40 Recharge SUV later this month. The deliveries of the SUV will begin closer to the festive season this year. It will rival the likes of Kia EV6 among other premium electric cars in the market.

Powered by a 78kWh battery pack, the Volvo XC40 Recharge can run 418 kms without the need to recharge. The electric SUV can also generate 408 hp of maximum power and 660 Nm of peak torque.

The Volvo XC40 Recharge electric SUV to be assembled for the Indian market will be similar to the ones sold in global markets. On the inside, the Volvo XC40 Recharge will come with a 12.3-inch driver's fully digital screen and a new 9.0-inch vertical touchscreen infotainment system that has been developed in coordination with Google. There are other features like wireless charging, panoramic sunroof, automatic climate control, 360-degree camera and more. The unit to be sold to the Indian customers will get 100% leather-free upholstery which is just another way of showing how much Volvo cares for the environment.

As far as the range of the XC40 Recharge SUV is concerned, it gets up to 418 km WLTP range on a single charge. The electric SUV supports 150 kw DC fast charging units which can recharge the XC40 electric SUV from 10 percent to 80 percent in just 33 minutes.