Wait for Tesla Roadster, Cybertruck gets longer; production pushed back to 2023

While Tesla Roadster was supposed to launch last year, the Cybertruck launch has been delayed three times since its global unveiling almost two years ago.
By : HT Auto Desk
| Written By : Sabyasachi Dasgupta
| Updated on: 13 Oct 2021, 01:56 PM 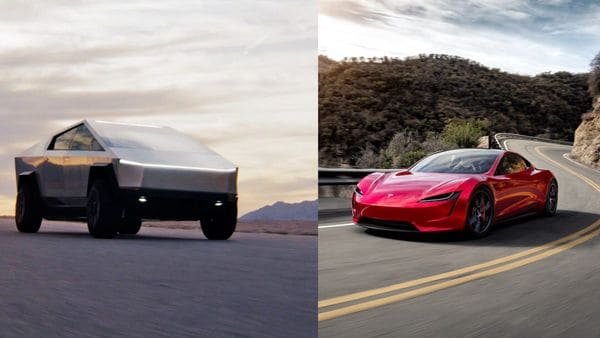 Wait for Tesla Roadster, Cybertruck gets longer, production pushed back to 2023.

Tesla Roadster and Cybertruck production have been postponed again. The delay was announced by CEO Elon Musk himself at the Tesla's annual shareholders meeting. He confirmed that the two most-awaited vehicles from the US-based electric vehicle manufacturer have their official launches postponed to 2023.

Elon Musk told Tesla shareholders, “Most likely what we will see is Cybertruck production next year and then we will reach volume production in 2023. We hope to be able to produce the Semi [Tesla truck] and the new Roadster in 2023 as well." Musk attributed the delay to the effects of the pandemic and the global chip crisis.

The Roadster was first introduced in 2017, as stated above. According to the automaker's CEO, Elon Musk, the car would have "rocket thrusters" and would be "the fastest in the world." The forecast given at the time was that the model would hit the market in 2020 – which ended up not happening, thanks to the brand's focus on volume production of cheaper vehicles, such as the Model 3 and Y.

The estimated price for the Roadster is $250,000 (R$1.4m). This refers to the first thousand cars to come off the assembly line, which will be a special edition.

Unveiled in November 2019, the Tesla Cybertruck was scheduled to hit the market as early as 2021. Since then, the official launch of the electric pickup has been delayed three times. Among the reasons are the pandemic and the semiconductor crisis, a problem that has affected the automotive industry globally. It will be produced at Tesla's Gigafactory in Austin (Texas), a city that will also house the automaker's new headquarters.

Tesla Cybertruck has a body made of stainless steel and factory-shielded glass. The model will have versions with one, two or even three electric motors. For the most powerful, Tesla promises an acceleration from 0 to 96 km/h in less than 3 seconds and a top speed limited to 210 km/h. The range must exceed 800 km and the total power can exceed 1,000 hp.