A Tata Nexon EV was seen engulfed in flame in the Vasai area in Mumbai on Tuesday. A video of the incident has gone viral across social media.
By : HT Auto Desk
| Updated on: 23 Jun 2022, 11:54 AM 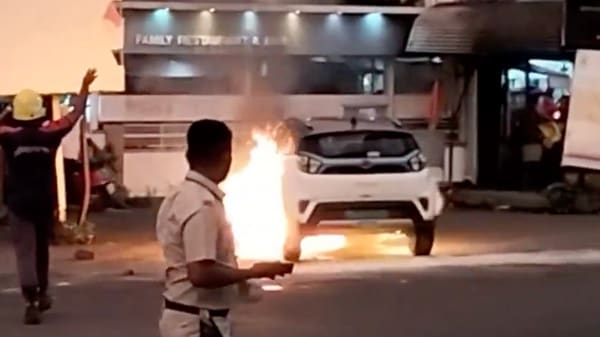 A Tata Nexon EV was damaged in a fire incident in the Vasai area in Mumbai on Tuesday. (Image courtesy: Twitter/@KamalJoshi108)

A Tata Nexon EV caught fire in Mumbai on Tuesday, triggering fresh round of debate over safety of electric vehicles sold in India. A video of the incident, which was shared across social media platforms on Tuesday, has gone viral. Tata Nexon EV, the best-selling electric vehicle in the country currently, was damaged in the fire incident. The carmaker later came out with a statement regarding the incident and its plan of action.

The video shows a white Tata Nexon EV engulfed in flame outside a restaurant in West Vasai area of Mumbai. Police and firefighters are also seen trying to put out the fire and regulate traffic in the area. According to reports, the fire was later put out. There has been no report of any injuries in the incident so far. The cause of the fire is also unknown.

Tata Motors issued a statement on Wednesday assuring an investigation into what led to the Nexon EV catching fire. The carmaker said, “A detailed investigation is currently being conducted to ascertain the facts of the recent isolated thermal incident that is doing the rounds on social media. We will share a detailed response after our complete investigation. We remain committed to the safety of our vehicles and their users. This is a first incident after more than 30,000 EVs have cumulatively covered over 100 million km across the country in nearly 4 years."

Already under pressure after fire-related incident in EVs, Ola Electric CEO Bhavish Aggarwal also shared the video on his social media platform. He also wrote a message that EV fire incidents are not uncommon and have been reported globally as well. However, he maintains that EVs are safer than ICE vehicles in terms of such incidents.

The debate over EV safety issues started with a video of an Ola Electric S1 Pro scooter catching fire in Pune. Later, there have been multiple EV fire incidents which involved top electric two-wheeler manufacturers like Okinawa Autotech, Pure EV among others. At least six people have been killed in such incidents. Several EV makers were forced to recall their products amid criticism over safety issues. A panel of experts was set up by the Centre in March to investigate reasons behind electric two-wheeler fire incidents. The panel will also suggest measures to minimise such fire incidents along with its report.