Lexus LS 500H: The coolest car I may never buy

Lexus LS 500H takes automotive luxury and adds a whole lot of Japanese touch to it, including special attention to minutest of details.While meant primarily to unwind on the exceptionally opulent rear seats, the LS 500H has a 3.5L V6 petrol that tempts you to give it a regal shot.
By : Prasad Sanyal
| Updated on: 06 Jan 2021, 11:27 AM

While a Lexus is almost always best experienced in the back seat, it would be a shame not to be behind the wheels of this luxury offering from the Japanese car maker. (HT Auto/Sabyasachi Dasgupta)

New year and a new car? Not quite. That’s a job I leave for our auto editor Shubhodeep - and you should check out his latest here.

This car isn’t new- not old either. Some things aren’t binary. No, this review is of a 2020 car that piqued my interest initially with its price tag.

If we’re talking luxury limousines, what are the first few names that come to mind? Mercedes S-Class, Audi A8, BMW 7 series, and maybe a Bentley or a Rolls Royce, right? All German or at least European in pedigree. So I wondered, what a Japanese carmaker was doing with the Lexus LS 500h, asking not for merely S-Class but Maybach prices, with a sticker price of nearly ₹2 crore.

Admittedly, the brand has been around for three decades but, in India, the mass Toyota is better known than its luxury offshoot.

My first impressions of the car as it arrived — where do we park this? This is a long, long car - over 5 metres in length and 2 metres across. 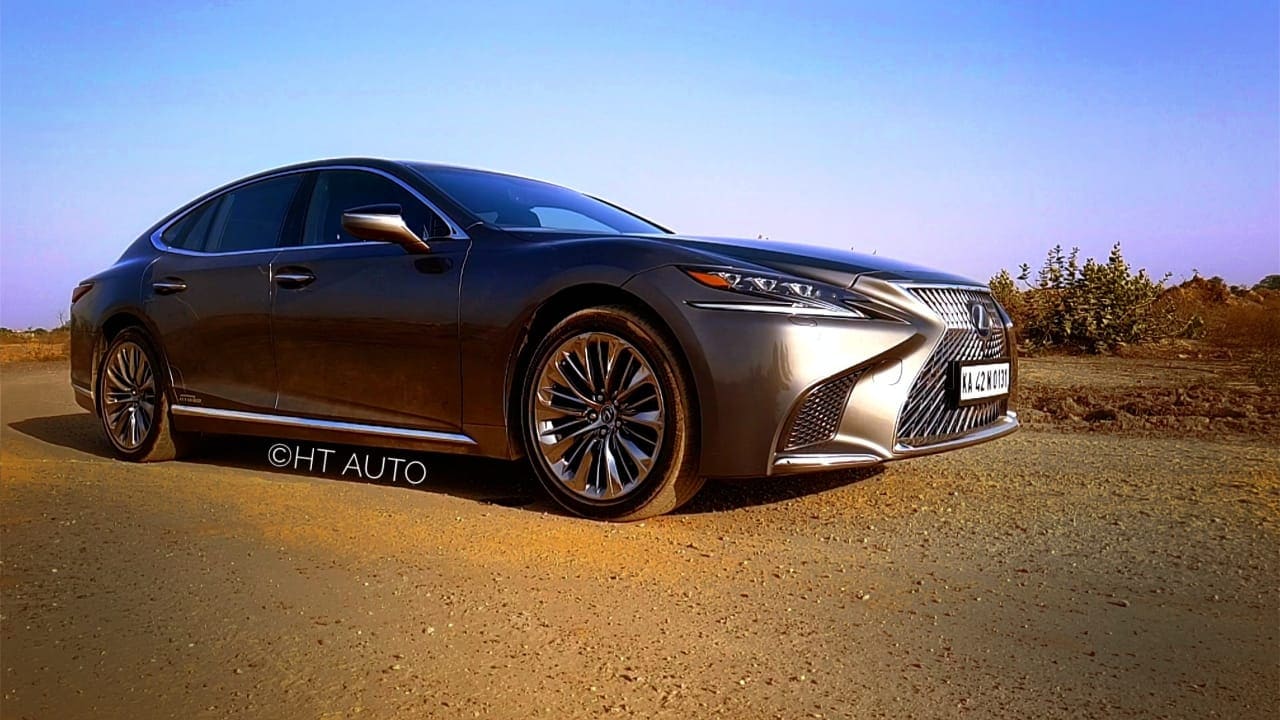 The LS 500H may have a low-slung profile but adaptable air suspension gives it a slight lift for better negotiating Indian roads. (HT Auto/Sabyasachi Dasgupta)

The Lexus’s stance is more sporty than the German competition it hopes to take on. Take a look at the LS 500h- the flagship sedan in the Lexus stable- and you’d think the designers in Germany suffer from Serotonin deficiency; the German cars look joyless in comparison.

The front is undoubtedly where this car is at its flattering best with the huge spindle grill dominating its face. 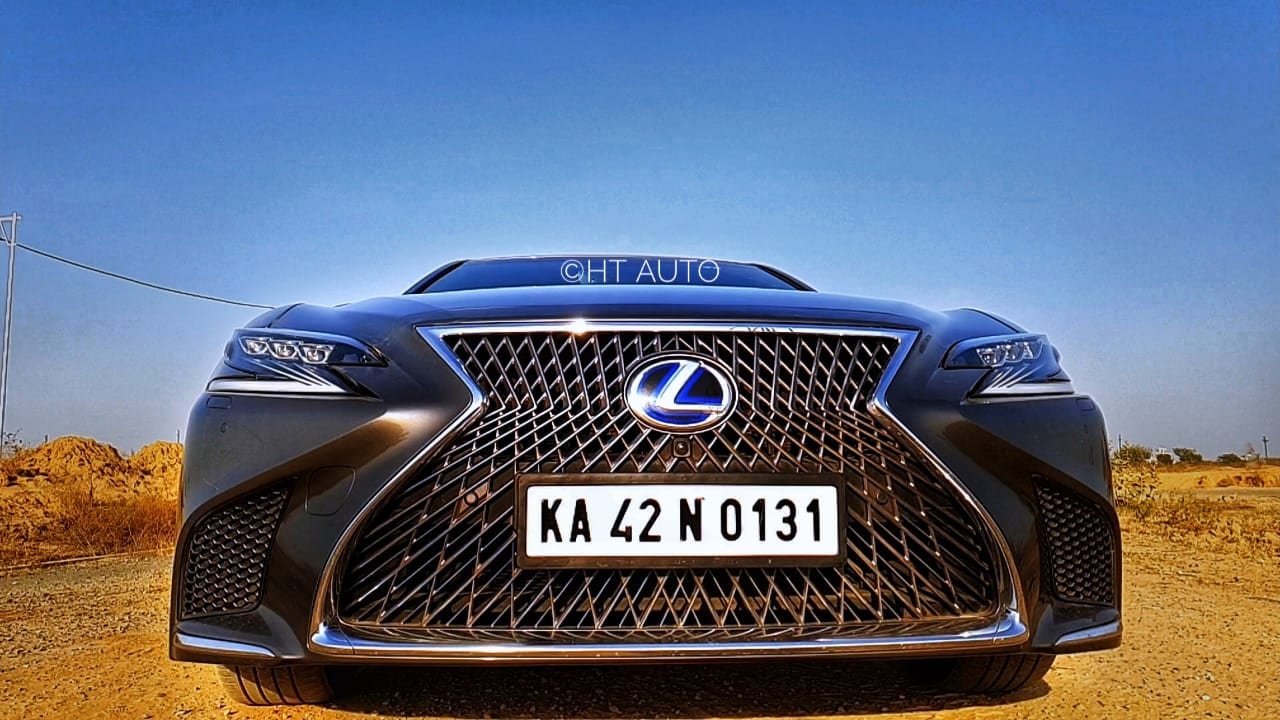 Lexus LS 500h is best defined on the outside by its mammoth front grille. (HT Auto/Sabyasachi Dasgupta)

Then there are the matrix LED head lamps in a Z-shape, which look like little bolts of thunder, adding to the overall appeal. 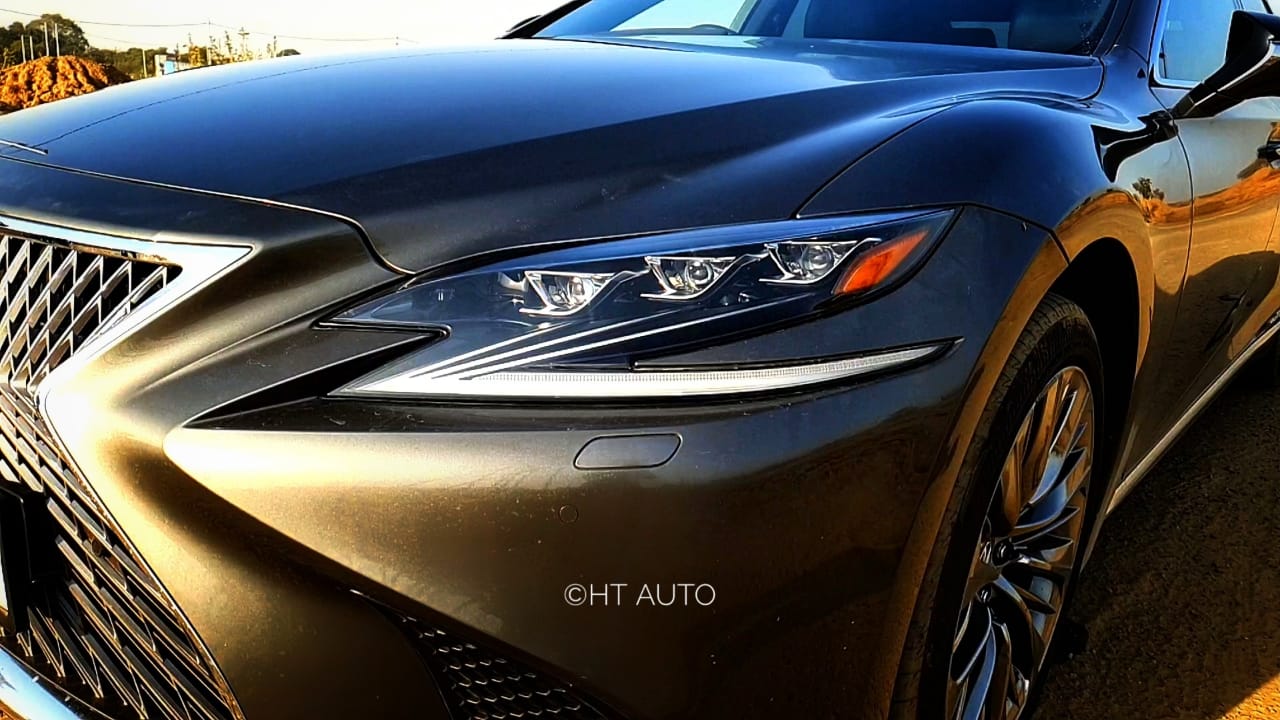 Designers at Lexus seem to be in a league of their own and the LS 500h is proof of this. (HT Auto/Sabyasachi Dasgupta)

Turn slightly from there and the 20-inch alloys giving it that added oomph! There is nothing remotely understated in the car’s exterior. The car is quite low for a sedan. I also found the six-window design interesting: there are literally two (small) windows behind the rear windows and the rear windshield - that’s wrapped in a chrome trim. The rear end is nice - and though not exaggerated as the front, it looks good with its chrome trimmings. 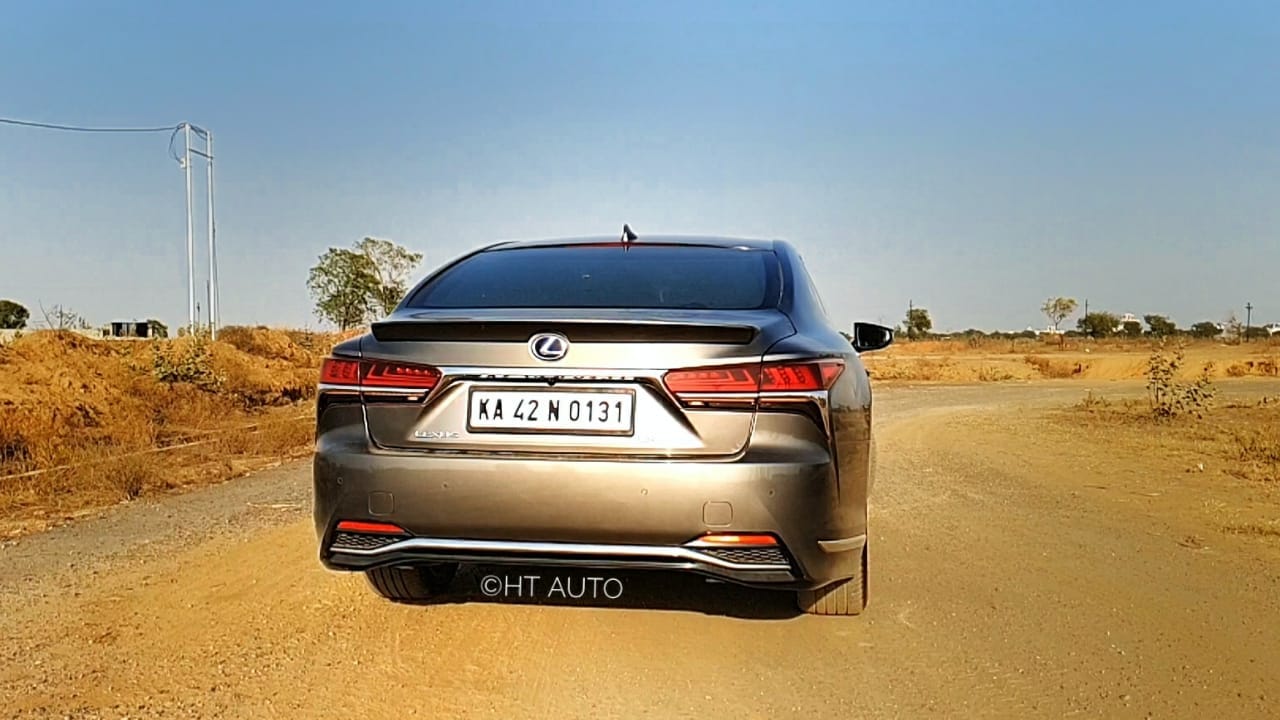 If the front profile of the Lexus LS 500H is out to evoke emotions, the back profile is meant more for conservative admiration. (HT Auto/Sabyasachi Dasgupta)

In the 48 hours I drove the Lexus LS 500h, it must be said that it turned heads - and I was stopped on more than one occasion on the NCR’s roads where this brand is still a relative novelty.

Under the hood is a 3.5L V6 petrol mated to an electric power unit that produces 359 hp and 350 Nm of torque. Lexus claims a 0-100 kmph at 5.6 seconds. That’s impressive on paper but the car does sound whiny when you rev it out. And that’s because, perhaps, you aren’t meant to. Even in the sports mode with the stiffest suspension setting, the Lexus LH 500h doesn’t feel as assured as perhaps some of its competitors like a BMW 7 series (not comparing it to a Mercedes S-Class or a Maybach because I haven’t driven one).

a 6-speed CVT. That effectively gives the Lexus LS 500h some green credentials with 10 gear ratios and reduces the rubber and effect that’s common all CVTs. But this won’t warm the cockles of anyone who’s driven with a BMW Steptronic or and Audi DSG.

On the positive side, the Lexus didn’t feel its size while driving and the impact of changing drive modes was almost immediately felt, not just in the suspension, but also the steering weight. So you can enjoy a weekend drive in this car.

The design is based on the Japanese principle of hospitality: Omotenashi. This captures the way in which Japanese hosts pay attention to detail and the anticipate their guests' needs.

One example of this is when you open the car to get in, the air suspension raises itself to make it ideal for you to drop down. Then there’s the seat-belt holder that automatically rises to meet the belt you’re pulling in. And the steering moves down and out to a ergonomically better position for driving. 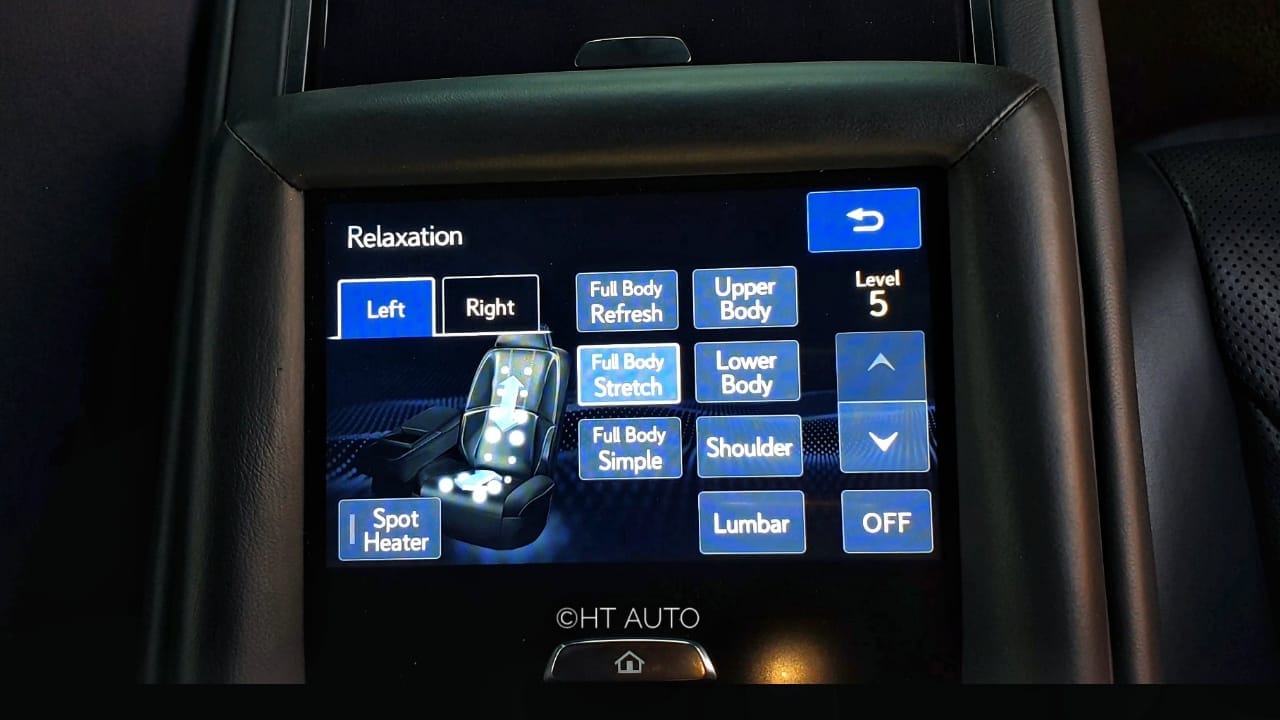 If a relaxing spa on wheels is what your heart desires, look no further because the Lexus LS500H has you covered. (HT Auto/Sabyasachi Dasgupta)

In addition to the four-zone climate control that’s there in each zone, you get the climate concierge - this calculates the body temperature of each individual occupant of the seats and makes minor adjustments.

The front cabin is a blend of Takumi craftsmanship meets clinically certifiable OCD. In the flowing dashboard that’s wrapped in leather, I actually spent half an hour looking for, and did not find a single stitch out of place. There was hand-cut glass ornamentation on the door panels and the floating door handles which gave the car I was driving a bespoke touch.

What is awry in 2020 is the lack of support for Android Auto and Google Car Play. The test vehicle I drove was nudging me to download a Lexus app - but I refrained from doing so. And while that may be an answer for most of the problems I had, support for standard apps as default would be nice.

The other major downside is the absence of a touchscreen on the front 12.3 inch infotainment display. 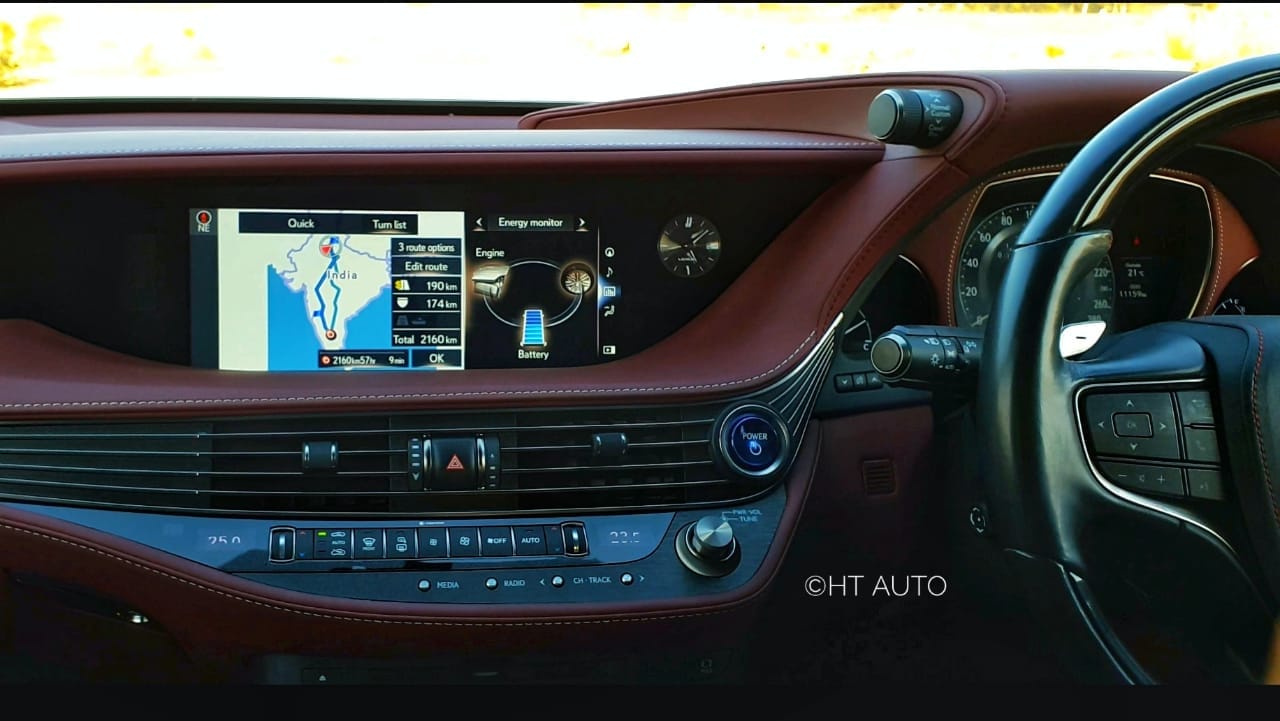 The main infotainment unit is large and well positioned to negate glare. Why it isn't touch-enabled though is indeed a wonder. (HT Auto/Sabyasachi Dasgupta)

There is a laptop- style track pad to scroll along between the different icons and pressing down to choose one. Apart from being fidgety -the most polite word to describe this, it is virtually impossible to operate the Lexus touchpad while driving. And the non-intuitive menu doesn’t help either.

Move to the rear and that’s where a Lexus reveals its true colours. In the Lexus LS 500h, you want to be driven around and about, and experience defying backseats that recline by around 50 degrees and adjust in 22 different ways.

There is virtually nothing that you’d find wrong with the seats, the central touch console from where you control all the ins and outs like the lights, the shades, the massage option in the seat, the entertainment panels that play music and video (remember Blu Ray discs? This has a Blu Ray player!). The speakers virtually cancel out any noise coming in - the 23 speakers in the Mark Levinson surround system delivering quality that a die-hard music fan too can be proud of.

Word of caution: The hand rest does pop up to feign a third seat with a headrest but don’t even think of getting that third person at the back - there is no getting over that massive hump made by the central transmission tunnel.

The Lexus LS 500h stands out in the luxury limousine lineup in that it’s differentiated. The rear seat is where you want to be after a tough day at the boardroom. However, it isn’t as fun to drive and from behind the wheels may not be the best car this kind of money could buy. So switch out your chopsticks for a fork and knife and order the bratwurst instead of the sushi if you like to drive instead of being driven.