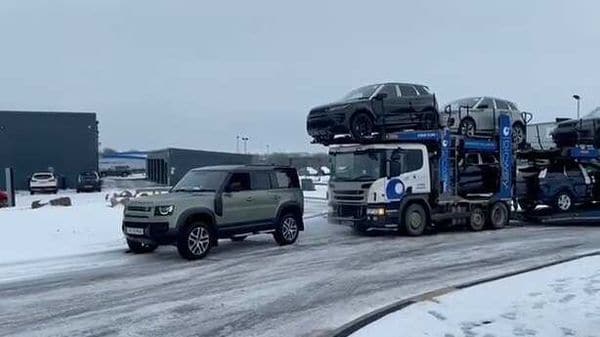 If there was any doubt about the capabilities of the Land Rover Defender SUVs to tackle tough terrain or pull weight, they can rest in peace now. The British carmaker has shared a video of the iconic off-roader pulling out a truck, almost 10 times its weight and loaded with seven other SUVs, out of snow. The video highlights what the Defender SUV is capable of doing.

The video, reportedly shot by one of the Land Rover employees, has been shared by the carmaker on social media and has gained much traction. It is seen pulling the 44-tonne transporter, which got stuck in snow while delivering seven SUVs on its back. The Defender SUV was pressed into service to pull the truck out of the sticky situation.

The Land Rover Defender SUV sports a max payload of 900 kg and a massive wading depth of 900 mm. It also gets a completely overhauled Terrain Response 2 system and air suspension. The latter comes standard on the Defender 110.

The new #LandRover #DEFENDER helped keep things moving during the UK's recent icy weather, using its towing capability to get some precious cargo back on its way. Learn more about the new Defender's extraordinary towing capability: https://t.co/HcwOcDYpIH #TeamDefender pic.twitter.com/8obhE55TeM

The Defender SUV is based on a completely new D7X platform which, as per Land Rover, is the stiffest platform ever made by the company till date. The British carmaker also says that it has gone 'further and beyond' to develop the new Defender which has been tested for over 1.2 million kilometres with over 45,000 individual tests. "It is the toughest Land Rover ever made," claims the company.

Land Rover Defender 110 recently managed to gain full marks - and five stars - in the latest round of Euro NCAP crash tests. Built for the outdoors, the latest Defender has been launched in several markets, including India, in recent months and is now backing its safety features almost as much as its terrain-conquering highlights.

In India, the new Defender was launched on October 15 and starts at ₹73.98 lakh (ex showroom).