Exclusive: 2022 Audi Q7 starts arriving at dealerships ahead of launch

While the latest Q7 will be powered by a three-litre petrol unit only, there is much that the SUV is promising to once again bring prospective buyers to the Audi fold.
By : Shubhodeep Chakravarty
| Updated on: 16 Dec 2021, 15:37 PM 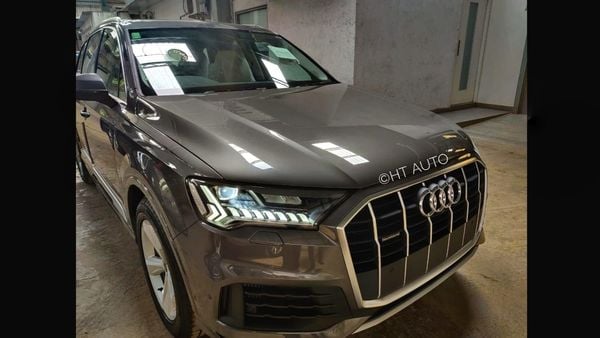 The 2022 Audi Q7 has started arriving at dealerships ahead of launch early 2022.

The 2022 Audi Q7 will be the first launch from the Germans in India come the new year and the SUV has already started arriving at select dealerships in the country. HT Auto accessed an exclusive image of the latest Audi Q7 at a dealership, with its bolder face amply evident.

The move towards BS 6 emission norms had meant that the Audi Q7 was one of the models that was suspended from the company's India product portfolio despite the success the SUV had here. But its return, much like that of the 2021 Audi Q5 that was launched last month, could once again put the focus on the company's SUV lineup that are now embracing a petrol-only engine option.

While the latest Q7 will be powered by a three-litre petrol unit only, there is much that the SUV is promising to once again bring prospective buyers to the Audi fold.

The 2022 Q7 from Audi has styling elements that now bring it nearer the newer models launched by the German brand in India and elsewhere. The octagonal single-frame grille, for instance, is now more pronounced and look bolder courtesy sharper Matrix LED head lights on either side. The bumper has also been reworked and the air dams on either side have been made even more prominent.

The Q7 model available in global markets gets some chrome additions on the exterior profile and the India-spec is likely to retain the element.

But while the new Q7 now looks more bolder yet sportier on the outside, the cabin of the SUV has come in for a host of updates. The dashboard is reportedly redone entirely while the twin-screen MMI display makes its way in. The main display measures 10.1 inches while there is an 8.6-inch screen for HVAC controls, apart from the 12.3-inch driver display.

Also expect loads of feature additions which are likely to include a panoramic sunroof, Bang and Olufsen sound system, HUD as an optional as well as four-zone climate control and ambient lighting.

Production of the latest Audi Q7 has already started at the Aurangabad facility and a launch is expected early 2022.