Tesla has received a host of new functionalities and fun features in its latest software update.
By : HT Auto Desk
| Updated on: 25 Dec 2021, 15:43 PM 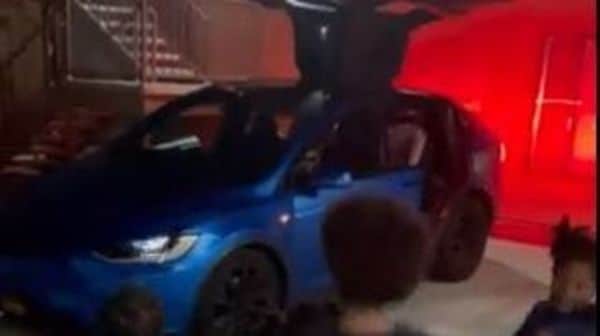 The Light Show function of the Tesla Model X flashes the lights in sync with the music played by the car's audio system. (Image: Twitter/Tesla Silicon Valley Club)

Tesla is known for innovations and the automaker releases its holiday update every year, which come as a highly anticipated annual software rollout from the US-based electric car major. These software updates usually come with a lot of fun upgrades known as easter eggs as well as some nifty features.

The latest update introduced this year too comes with pretty interesting features. One of them is the Light Show. A video has emerged online showing some kids dancing to the tune of the Trans-Siberian Orchestra playing at a Tesla Model X's entertainment system. What's more interesting is the flashing light show in sync with the music and wagging of its wing doors.

The @Tesla is pure joy on wheels. Thankful for the Christmas Holiday show. @elonmusk pic.twitter.com/4MgfZTyybZ

Tesla's software update note for this feature describes this function as "Watch your Tesla dance to a choreographed light show any time of the year." The note also reads that “Open toybox, tap Light Show and follow the instructions."

There are several other features too introduced in the latest software update. These include customizable app launcher, simplified controls, blindspot camera, edit waypoints, TikTok etc. Watching TikTok is the new functionality added to Tesla cars through this latest software update. Also, the users can play games like Sonic the Hedgehog, Sudoku, The Battle of Polytopia etc.

The customizable app launcher allows the user to drag and drop one's favourite apps to any position along the bottom menu bar for easy access. All the Tesla owner needs to customize his or her car's infotainment system menu bar is hold any icon and then drag it to reorder. To adjust controls such as heated seats and defrost, one needs to tap on the temperature or swipe up from the bottom of the screen.

The simplified controls seem to have been designed to group basic functions under a new menu with submenus for charging, trips and servicing.