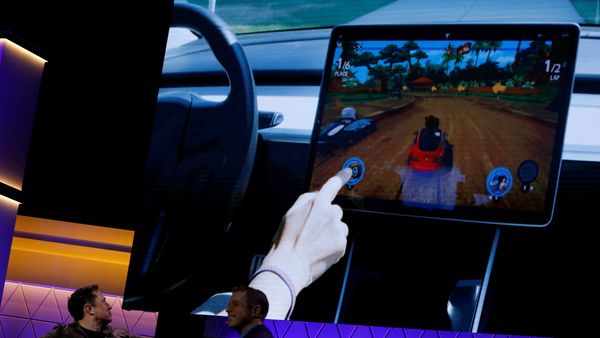 Tesla has long been touted as a company that thinks different, works different and even drives different. With a focus not just on capable electric vehicles but models that are loaded to the brim with cutting-edge technology, Tesla has always tried to raise the bar, leaving rivals with little choice apart from playing catch up. One feature that has made headlines time and again is in-car gaming for passengers inside a Tesla. And while passengers enjoying a game may seem quite harmless, Tesla allowing drivers to take part has raised eyebrows and is now under scrutiny.

Here are five key things to know about in-car gaming in Tesla vehicles and why it has come under a probe:

Tesla has allowed drivers to play video games on a car's main infotainment screen while the vehicle is in motion. The feature called ‘Passenger Play’ has reportedly been active since December of 2020 and allows for gaming while the car is in motion. Previously, gaming could only be activated if the vehicle was stationery.

Not all fun and games?

While Tesla and CEO Elon Musk have previously said that autonomous driving technology would mean it is absolutely safe for even a driver to make use of features such as gaming and video conferencing in a moving vehicle, many are not buying the argument just yet.

It is argued that while a driver gaming inside a moving Tesla is blatantly risky even if the EV is on autonomous mode, even a passenger using the feature can potentially distract a driver and may result in an untoward incident.

A probe has now been launched by the National Highway Traffic Safety Administration (NHTSA) and covers nearly 6 lakh Tesla units manufactured between 2017 till at present. The probe will reportedly cover Tesla models like S, X, Y and the 3.

It is reported that NHTSA decided to launch the probe after it received a complaint that the gaming feature was active while the Tesla vehicles are in motion.

The probe is likely to examine all aspects of the in-car gaming feature inside Tesla EVs to study if the feature does cause a distraction to the driver and possibly impedes road safety rules. The frequency, screen glare and use-case scenarios are expected to be given a close look.

It is possible that if the feature is deemed unsafe, there could also be a recall issue that is ordered.

A car is a car no more

Automotive brands are now looking at offering subscription services inside vehicles - from GPS to fitness tracker and even streaming services - in order to open this as an additional revenue stream. Many companies expect to earn in billions by putting out options to buyers to subscribe to certain services when buying the car itself.

The battle between automotive companies, when boasting about new products, is as much about in-car features as it is about its performance, looks and safety aspects.