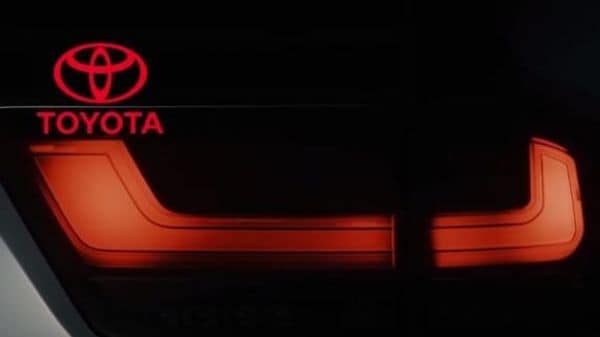 Toyota is all set to unveil its updated 2022 Land Cruiser SUV on June 9. The Japanese automobile giant has teased its upcoming flagship SUV again on online platforms ahead of the global debut. The latest teaser video reveals its L shaped LED taillights and other design bits as well.

The teaser video reveals the brawny front profile of the upcoming SUV in the blink and miss videos. The LED daytime running lights, contours of the bonnet and the front grille are also revealed in the latest set of teaser videos.

The new 2022 Toyota Land Cruiser is internally known as LC300. It will be underpinned by the TNGA-F architecture. It gets a completely revised exterior, a massively overhauled cabin, new engine and transmission as well. But the cabin of the car is claimed to carry the iconic styling characteristics of the premium SUV.

The power source for the 2022 Toyota Lands Cruiser will be downsized and efficient V6 engines replacing the massive V8 petrol and diesel engines. A 10-speed automatic transmission would be there mated to the engines.

The new Toyota Land Cruiser will come with a spicy GR Sport version as well. This will be more aggressively designed and higher performing. There will a wide range of hi-tech features onboard this variant. These will include an underbody camera, 3D Multi-Terrain Monitor system, head-up display, quad-zone climate control, a 14-speaker JBL sound system, a 12.3-inch touchscreen infotainment system etc.