The biker tried to cross the tracks while the barriers were shut to let Rajdhani Express pass. He jumped off his bike in time to escape being run over.
By : HT Auto Desk
| Updated on: 15 Feb 2022, 10:09 AM 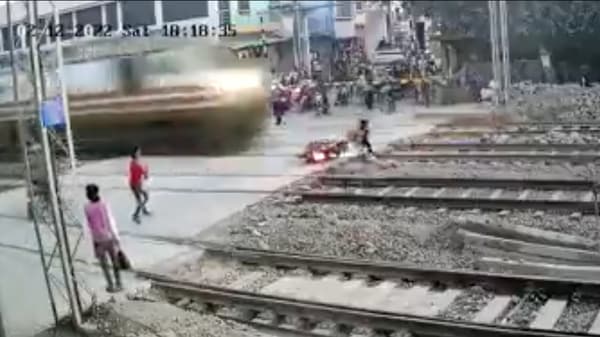 A motorcycle was blown to smithereens by a speeding Rajdhani Express in Mumbai as the biker tried to pass a railway crossing. The video of the incident, which was caught on a CCTV nearby, has gone viral on social media.

The video shows the biker violating basic traffic rule at railway crossings. He defied the closed barriers at the crossing to enter the tracks despite the incoming train. He almost went past the track on which the train was expected. But he soon realised it was too late to escape the speeding train.

Within seconds, the train was seen entering the railway crossing at very high speed. The biker, in the nick of time, is seen jumping off his motorcycle to escape certain death. After he left his bike on the track, the person is seen tumbling on the sides as he tried to run away from the incoming train.

The speeding train is seen hitting the bike, which was left perilously close to the tracks. In split seconds it was blown to smithereens. Debris of the motorcycle flew in all directions with several onlookers around who were trying to alert the biker about the incoming train.

While the biker managed to escape alive from a certain death, he was injured in the process. Parts of the bike hit the biker, while some flew as far as the edge of the railway crossing threatening others waiting at the edge of the barrier. The biker is seen limping across the track, holding his back, indicating that one of the pieces of the motorcycle had hit him after the train crashed into the two-wheeler.

It could have been worse for the biker had the one of the pieces had hit him above shoulder, or anyone else waiting on the side of the tracks.

The video, which went viral, drew criticism from several netizens who blamed the biker for flouting basic traffic rules at such railway crossings. It is a common sight in India where two-wheelers, bicycles try to cross the railway tracks despite incoming trains to save just a few minutes.