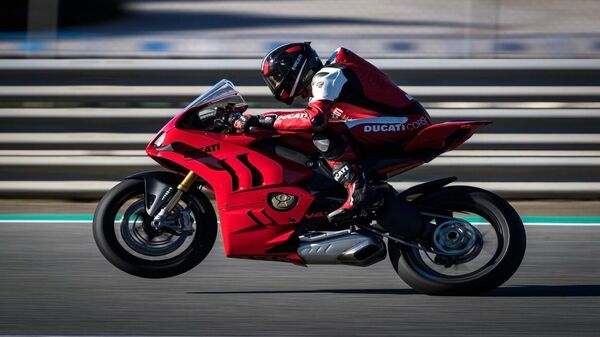 Ducati has introduced the 2023 Panigale V4 motorcycle with some notable electronic updates. The new update involves the bike's electronic aids and the cooling system. As per Ducati, the new tweaks are in line with its latest race-spec motorcycles which are updated after every season.

For 2023, revised on the Panigale V4 are the engine braking control and the quickshifter. The level of engine braking has been changed on the bike with the ‘Engine Brake Control Evo 2’ software that alters the braking on each of its three settings. The company also says that it has updated the software to function differently in each gear on each of the three levels. Other than this, features such as the Ducati Traction Control and ride-by-wire systems have also been updated.

The 2023 Panigale V4 now comes with an updated quickshifter for slicker shifts on full throttle. The new quickshifter is said to allow quick gear shifts by eradicating the need to cut off gas momentarily at part throttle shifts, unlike the previous version. At wide-open throttle, the quickshifter will still cut the ignition but power will be restored in a more linear manner, says the company.

In addition to that, the motorcycle has also been given an updated radiator fan to reduce the heat build-up. This should definitely come in handy in hotter regions including India.

The existing MY022 Ducati Panigale V4 owners can also opt for these new changes with a software update. The flagship sport bike from the Italian luxury bike maker costs ₹28.40 lakh (ex-showroom, Delhi) in India. The updated bike is likely to cost slightly higher given the introduction of MY2022 changes.