This state govt released ₹10k allowance to each of 2.62 lakh auto,taxi drivers

In order to help auto and taxi drivers, this state's government on Thursday disbursed four months in advance an annual financial assistance of ₹10,000 to each of the 2.62 lakh beneficiaries under a state welfare scheme.
By :
| Updated on: 04 Jun 2020, 04:45 PM 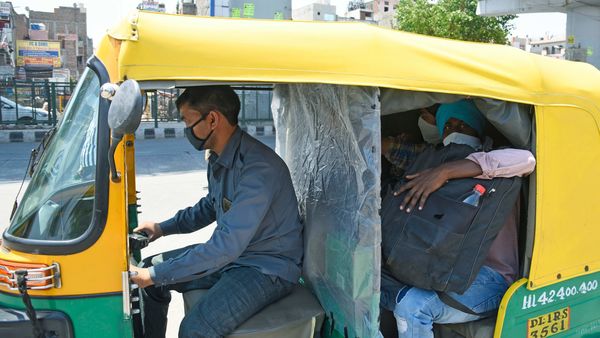 Auto rickshaw seen with a plastic layer divider between passenger and driver side in New Delhi. (Representational file photo)

In a move to help auto and taxi drivers affected due to the Covid-19 lockdown, the Andhra Pradesh government on Thursday disbursed four months in advance an annual financial assistance of ₹10,000 to each of the 2.62 lakh beneficiaries under a state welfare scheme.

Chief Minister Y S Jagan Mohan Reddy announced the transfer of a total amount of ₹262.49 crores to 2,62,493 beneficiaries under the YSR Vahana Mitra scheme during a digital conference with district collectors and beneficiaries, an official statement said.

"The chief minister also appealed to the beneficiaries to use the money for the intended purpose and not for alcohol. This would put both passengers and the driver into trouble," the statement added.

The YSR Vahana Mitra was launched on October 4, 2019 with an aim to provide an annual allowance of ₹10,000 to auto and taxi drivers to meet insurance premium, license fees and other recurring expenses.

According to the government, the annual payment of allowance under the scheme was advanced by four months as the auto and taxi drivers had no source of income during the past few months due to the lockdown clamped to fight Covid-19.

"We have announced the calendar for welfare schemes with the auto and taxi drivers getting ₹236 crores transferred as an unencumbered amount into their accounts which cannot be deducted by bankers for any previous commitment of the account holders," Jagan said.

The chief minister asked people to check their eligibility criteria for the scheme in their respective villages or ward secretariats. Those who meet the eligibility but have not received any amount as yet can reapply under the scheme, he said.

"They can also use the ‘Spandana’ online platform to claim their benefits, if they fit into the eligibility criteria. The amount will be credited by July 4," he added.

The government plans to disburse next week a financial assistance under a state scheme for barbers, washermen, and tailors, and to handloom weavers on June 24.