On Delhi roads, passengers are 'rare species' for auto and taxi drivers

Many drivers of paratransit vehicles say they have to roam around for hours before getting a customer.Many say when they do find people, they are often unable to accept because of one-passenger-only rule in place.
By : PTI
| Updated on: 21 May 2020, 09:23 AM 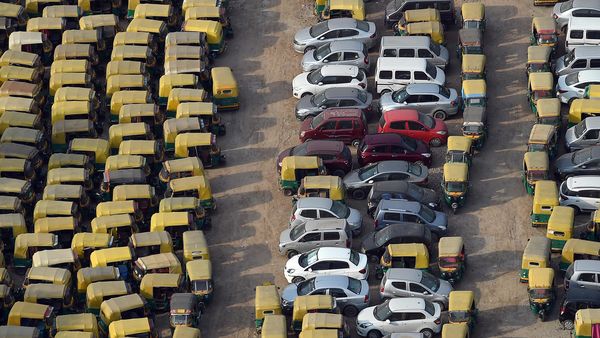 Auto drivers had urged Delhi government to open city roads for them. Now, they have urged the government to relax the one-person-only rule.

With people keeping indoors and venturing out only for urgent needs, drivers of paratransit vehicles like autorickshaws, e-rickshaws and taxis struggle to find passengers and make ends meet.

The compulsion to follow social distancing norm and sanitise the vehicles to combat coronavirus have only added to their financial woes, the drivers say.

"I started at around 8 am from Preet Vihar. I did not find any passenger for two hours. A woman and her daughter met me near the Nirman Vihar Metro Station, but I had to say no to them because of the government-announced one passenger norm," auto driver Abhay Kumar said on Wednesday.

Under lockdown 4.0, the Delhi government has allowed transport services in the city by limiting the number of passengers for various categories of vehicles.

Autorickshaws and e-rickshaws have been allowed to carry one passenger only. Taxis, cabs, Gramin Sewa, Phat-Phat and eco-friendly sevas can carry only two passengers.

"It is a tricky situation for auto drivers. While most are not getting any passengers due to coronavirus fear, in many cases they are forced to deny passengers numbering 2-3 due to fear of action," Rajender Soni, general secretary, Delhi Autorickshaw Sangh said.

Hari Prasad, who runs an autorickshaw near ITO, said it is very difficult to survive under the current situation.

“The problems are many--lack of passengers, social distancing norms and increased expenses to keep the auto sanitised.

"I had taken this auto on rent. I used to earn on an average around ₹400-500 every day. I have now taken a loan to survive with my family during lockdown, add to it the mandatory cost of fuel, rent and sanitiser. I thought I would get passengers, but in last two days I earned just ₹400. I do not think I can continue this anymore," he said.

Soni said the government should pitch in to help the drivers of paratransit vehicles and revise the social distancing norms.

"The government has allowed only one passenger in an autorickshaw which should be changed to at least two for autos and three for taxis," he said.

"Safety from coronavirus is important, but you cannot force them to provide services by facing losses. They are already broke due to joblessness in the past two months. The government should either compensate them or allow to carry more passengers," he said.

E-rickshaw driver Naushad said he took out his vehicle on Tuesday but thought better to wait for a few more days before working again.

"Yesterday was a very bad day. I hoped to earn some money but instead spent it from my pocket. I paid ₹100 for charging the e-rickshaw and went to the Tuglaqabad Metro Station in the morning. I returned back with just ₹20 in the evening," he rued.

“People are not coming out due to the fear of contracting coronavirus. Many have also lost jobs and have nowhere to go," he said.

The drivers of last-mile connectivity vehicles like Gramin Sewa, Eco Sewa, Phat Phat Sewa, RTVs among others had similar stories to share.

"Such vehicles mostly cater to lower middle class people, including daily wagers and factory workers, many of whom have gone back to their home states. Drivers of these vehicles do not earn much as the fares are low and they cover short distances," Chandu Chaurasia, vice president, Capital Drivers Welfare Association said.

He also added that the government should revise the social distancing norms and extend financial help to those running the paratransit vehicles.