Auto rickshaws, e-rickshaws and cycle rickshaws are permitted across Delhi roads in the fourth phase of lockdown but with only one passenger at a time.
By : HT Auto Desk
| Updated on: 20 May 2020, 01:31 PM 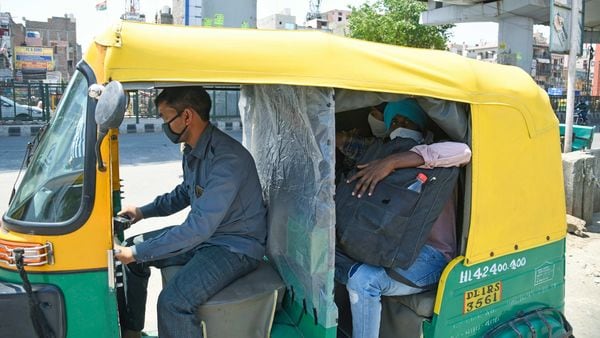 An auto rickshaw is seen with a plastic layer divider between passenger and driver side in New Delhi on Wednesday (May 19).

Monday may have come as a day bearing a whole lot of relief for around 95,000 auto rickshaw drivers spread across Delhi. After all, they were finally permitted to hit the roads after weeks of restrictions owing to the national lockdown to check the spread of Covid-19 disease. The day and the subsequent days, however, have brought confusion galore - mainly due to the one passenger only restriction announced by the Aam Aadmi Party government here.

While the one-person only rule makes sense for many as it is a way to ensure social distancing on Delhi roads and inside autos. Many drivers of three-wheelers are, however, perplexed when approached by two people of the same family. Most of them are now urging the Delhi government to increase the restriction to at least two passengers. "Most of the time, there are two people together. The government should allow at least two people to travel in auto as well apart from cabs. If we refuse, people cancel the ride," an auto driver told news agency ANI.

(Also read: Here are the rules of traveling in public transport in Delhi)

There is also confusion among passengers, especially those who may have to venture out with a child or children. "Do I put myself in one auto and my children in another," a passenger was quoted as asking.

Delhi has reported over 10,554 positive Covid-19 cases at the time of filing this report and CM Arvind Kejriwal has urged all to continue to exercise maximum caution. Many, however, are venturing out of their homes for either work or emergency work and several depend on public transportation to get from one point to the another.

Kejriwal, on Monday, has announced restriction on the number of people that can be inside public and private vehicles. While autos, e-rickshaws and cycle rickshaws are permitted only one passenger at a time, buses are allowed to ferry 20 people at any given time. Taxis can transport two passengers, private vehicles can have two occupants while pillion riding on two-wheelers is prohibited.