Two people are allowed inside private cars. Pillion riding on two-wheelers remains a no.Autos, e-rickshaws and cycle rickshaws have been permitted with only one person inside at a time. Cabs can have two passengers only.DTC buses will return to the streets but with 20 people on board at a time.
By : HT Auto Desk
| Updated on: 18 May 2020, 11:14 PM 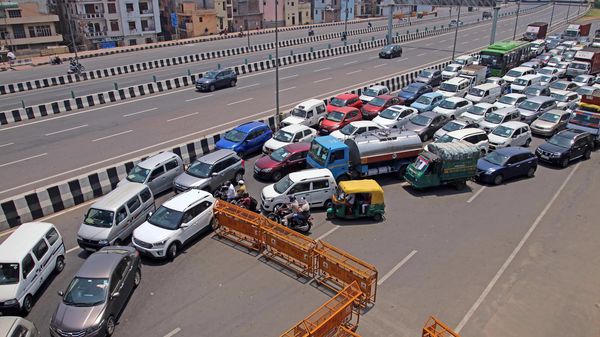 Heavy traffic jam seen at Yamuna Bridge on Vikas Marg during the fourth phase of lockdown amid coronavirus pandemic, in New Delhi on Monday (May 18)

On the first day of the fourth phase of national lockdown, Delhi government on Monday announced several relaxations for movement of people across the city albeit with restrictions. Chief Minister Arvind Kejriwal said that while the fight against Covid-19 pandemic remains priority, the relaxations in transport - among others - come to put Delhi back on track in a gradual manner.

The latest relaxations come with strict rules that every person in Delhi has to adhere to. So, while public buses will be allowed to ply, not more than 20 people at a time will be permitted inside and they will be screened for body temperature before they enter. Autorickshaws, e-rickshaws and cycle rickshaws have been permitted to only ferry one passenger at a time. Grameen Sewa vehicles can ply but with no more than two people at a time.

People with private vehicles can move across the city but cars cannot have more than two people inside at a time while pillion riders on two-wheelers are not permitted.

Car pooling and sharing is not allowed.

Delhi Metro will also not be operational till at least May 31, the last day of the fourth phase of lockdown.

RTVs have been allowed to move on Delhi roads but with not more than five persons on board at any time. Maxi cabs are allowed but with only five people inside while taxis and cabs can only ferry two people in one go. Kejriwal made it a point to highlight that the onus of sanitizing such vehicles would be on the driver for his safety and that of passengers.

Movement of people and of vehicles between 7 pm and 7 am remains restricted although essential workers are once again exempted from this rule.

Earlier in the day, massive traffic jams made their notorious return at several border crossings between Delhi and Gurugram, and Delhi and Noida. The vehicular queue went up to over a kilometre as local cops checked passes and the identity cards of the people travelling. (Full report here)