It is not clear if the condition the bridge was poor or if the weight of the truck which was transporting another relatively heavy vehicle may have been too much for it. Or both.
By : HT Auto Desk
| Updated on: 23 Jun 2020, 09:16 AM 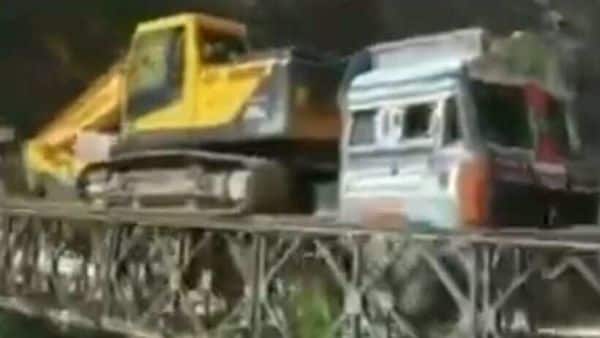 Screenshot from a video posted by ANI shows a truck just before it fell into a gorge after the bridge here collapsed.

In a shocking incident caught on camera, a bridge in Uttarakhand's Pithoragarh crashed while a truck was crossing it, plunging the vehicle into the gorge. Two people were reportedly injured in the incident and were rushed to the local hospital while there have been no reports of any fatalities.

The video of the incident was posted by news agency ANI and shows a truck carrying what appears to be a JCB earth mover on the Bailey Bridge in Pithoragarh. There is also a man who is seen walking on the bridge just behind the vehicle which had managed to almost cross over before tragedy struck. The bridge collapsed without warning, plunging the vehicle, along with the JCB, into the gorge below.

The man on foot appears to have also fallen too but this is not confirmed by the video.

#WATCH Uttarakhand: A vehicle fell off Bailey Bridge in Pithoragarh as the bridge collapsed while the vehicle was crossing it. Two people who were injured were taken to Munsyari for medical treatment. pic.twitter.com/kcWYwyi1Ds

According to the news agency, Preeti Priyadarshi - Superintendent of Police (SP), Pithoragarh - said the incident took place around 9.15 on Monday morning.

It is not clear if the condition the bridge was poor or if the weight of the truck which was transporting another relatively heavy vehicle may have been too much for it. Or both. Local media reports however suggest that the bridge has been a crucial link between Munsiyari and nearby villages and was used for commuting purposes as well as for movement of commercial vehicles carrying supplies.