LG is working with General Motors' engineers to clean up the manufacturing process at its battery plants and implement some quality metrics.Both the companies have identified LG Corp's battery plants in South Korea and Michigan as the source of defects in the EV batteries.
By : HT Auto Desk
| Updated on: 14 Sep 2021, 10:15 AM 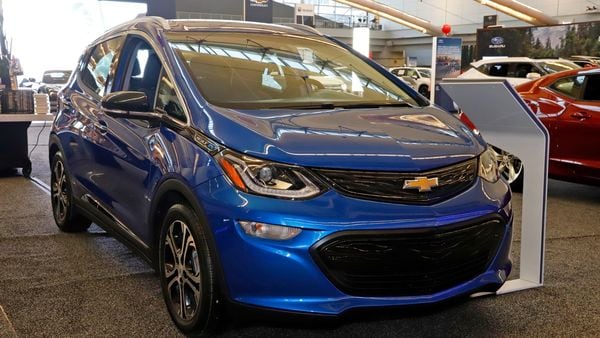 LG and GM are actively working with each other to come up with a final recall plan in order to fix the battery-fire issue in more than 140,000 Chevrolet Bolt EVs.

General Motors' Chevrolet Bolt EV has had an arduous past several months as incidents of fire have made owners pensive and possible convinced others to look elsewhere for their mobility needs. The automaker is now having a more direct involvement with its long-time South Korean EV battery partner LG Corp to track down and fix the problem of fire in these vehicles.

LG is working with the auto company's engineers to "clean up the manufacturing process" at its battery plants and implement some "GM quality metrics, GM's Chief Financial Officer, Paul Jacobson, said at an investor conference.

Both the companies have identified LG Corp's battery plants in South Korea and Michigan as the source of defects in the batteries, and thus in the Bolt EVs. The battery-related fires have caused GM to issue three recalls for the vehicles. The company has also set aside $1.8 billion in warranty since last November for the recalls for which it still has not implemented a hardware fix.

LG and GM are actively working and cooperating with each other to come up with a final recall plan in order to fix the battery-fire issue in more than 140,000 Chevrolet Bolt EVs, encompassing the entire production run since late 2016. “We are determined to do the right thing for our customers and resolve the problem once and for all. Once we are confident LG can provide us with good battery modules, we will begin repairs as quickly as we can," " GM spokesman Dan Flores told Reuters.

(Also read | Are lithium-ion batteries in EVs a fire hazard?)

GM has previously stated that while all the early Bolt models will have to get their entire battery packs replaced, the newer models will have only defective modules within the pack replaced. But these parts will be available only after November. Meanwhile, several Bolt owners and prospective EV buyers have been complaining and express concerns on social media which could possibly cause a permanent damage to the goodwill of both the companies.

Though GM and LG have time and again reiterated their close relationship, GM's CEO Mary Barra has also left open the possibility of find new partners for its future battery plants.