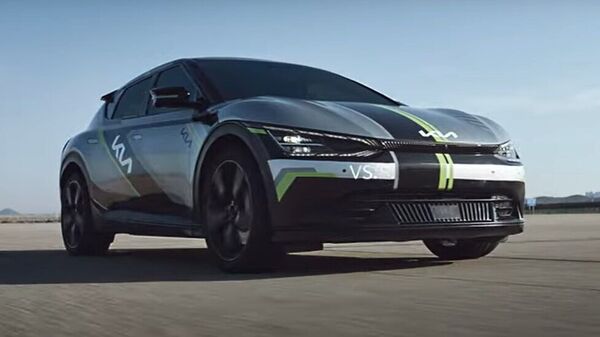 Kia announced a plan to expand its grand touring (GT) high-performance lineup with all-electric vehicle models. Kia plans to bring the EV6 GT version that the automaker showcased last year first in this range. When introduced, the Kia EV6 GT will compete with the likes of Mercedes-AMG GT, Lamborghini Urus, Porsche 911 Targa 4 and Ferrari California T.

Previously, Kia had informed about its all-electric EV6 GT's ability to sprint from zero to 100 kmph in 3.5 seconds highlighting the EV's performance-oriented capacity. The electric vehicle will come with a dual-motor and an all-wheel drive and will produce a power of 430 kW and offer a peak torque of 740 Nm. It will come with a top speed of 260 kmph. Kia has however not disclosed the range of the EV yet.

The standard Kia EV6 comes with a 77.4 kWh battery and an all-wheel-drive system. It offers a user with a maximum power of 239 kW and a peak torque of 605 Nm. It can accelerate from stationary to 100 kmph in around 5.1 seconds. Kia is also gearing up to bring in its flagship model EV9, a large SUV next year and thus suggestions are being made that a GT version of this SUV will also follow soon. It has been claimed that the EV9 model will provide a range of 100 km in just six-minute of charging.

Kia recently announced its plans to become a leader in the sustainable mobility category. It has planned to introduce two new EVs each year starting 2023 and go further ahead to build an entire line-up of 14 battery electric vehicles by 2027. The South Korean automaker also shared its goal to achieve an annual sales of 1.2 million BEVs by 2030.