A video went viral on social media showing a Hyundai Venue being completely swallowed by a sinkhole at a parking lot in a Mumbai residential complex.The Hyundai Venue SUV was later pulled out of, what turned out to be an old well, using cranes.
By : HT Auto Desk
| Updated on: 14 Jun 2021, 08:51 AM 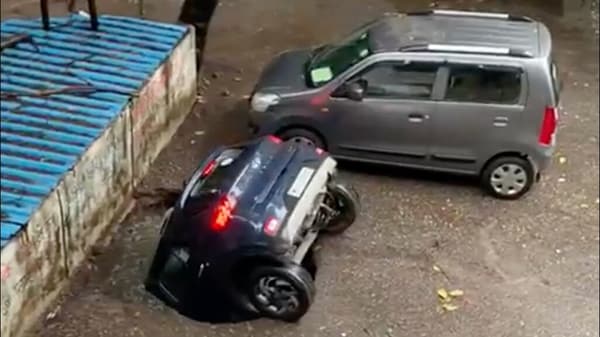 A Hyundai Venue SUV drowned in an abandoned well inside a Mumbai residential complex after the cement cover collapsed due to heavy rain. (Photo courtesy: Twitter/@ians_india)

A Hyundai Venue SUV was seen completely swallowed by a sinkhole that appeared after heavy rains in Mumbai over the weekend. A video went viral on Sunday showing the SUV going down the hole filled with water, leaving netizens amused.

The incident took place at Ram Nivas society located at Kama lane in Ghatkopar West. The blue Hyundai SUV was parked on top of a cement slab in the parking area of the residential complex. The video, shot by one of the residents, shows how the sinkhole formed neatly around the Hyundai SUV and not impact other cars around it.

The video shows the SUV's front part entering the sinkhole first. The rear part of the car follows and soon the entire vehicle disappears in the water. Thankfully, there was no one inside the SUV when the incident happened, and no one was injured.

In a freak accident in rain-battered #Mumbai, a parked car fell into a deep well, whose reinforced cement concrete cover broke to create a sinkhole, and was washed away, police said on Sunday.

The incident was reported from Ramnivas Society in Ghatkopar West. pic.twitter.com/ULokEjftTh

It was later discovered that the spot where the owner of the SUV chose to park it had an old well right under it. The well had been shut and covered with a cement slab. The well, which is about 40-feet deep, had swallowed up the Hyundai SUV down to almost the bottom of it, before the rescue operation began.

"The housing society had covered a well with reinforced concrete cement and residents were using the area to park their cars. A police team reached the spot and brought the car out of the water body. The spot has been cordoned for the safety of residents," a BrihanMumbai Municipal Corporation (BMC) official was quoted by PTI as saying.

Cranes had to be deployed to pull the car out of the well. It was finally extracted by late last night.

#WATCH | A crane pulls out a car that sunk in a sinkhole in Mumbai's Ghatkopar#Maharashtra pic.twitter.com/ZFn0ODsUu9

The incident also triggered a series of memes where people started to share the video along with their own take on the incident. While some called it a 'suicide attempt' due to rising fuel prices, others said the SUV found its own spot in a city that lacks parking space.

Anand Mahindra, Chairman of the Mahindra Group, also joined in the Twitter banter. He shared the video and said, "The earth seems both angry & hungry. The soundtrack needs a ‘burp’ at the end of the clip."

Ghatkopar, Mumbai post the heavy rains. The earth seems both angry & hungry. The soundtrack needs a ‘burp’ at the end of the clip... pic.twitter.com/Y4oEdzEtZC

The BMC refused to take responsibility for the incident which followed a spell of heavy rains in the city. The society has been asked to take necessary safety measures immediately, the BMC said.