In the first-half of this month, Indian gasoline and LPG sales were 10% higher than the same time last year, according to preliminary data.The sale of diesel, the country’s most popular fuel, lagged year-ago figures by 5%.
By : Bloomberg
| Updated on: 17 Dec 2020, 10:43 AM 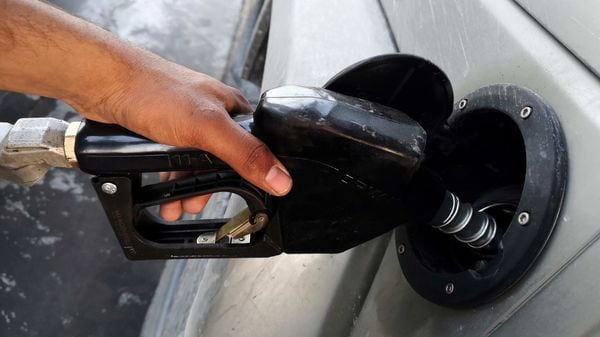 File photo of a gasoline pump used for representational purpose only

India hasn’t put the pandemic behind it, but its oil refineries have.

Three state-run processors including Indian Oil Corp., the nation’s top refiner, are currently operating at close to 100% capacity or higher, according to people with knowledge of the matter. Behind the recovery is strong demand for gasoline and liquefied petroleum gas as many opt to drive their own cars over taking public transport and cook at home to avoid restaurants.

The situation in the world’s No. 2 oil market follows a full rebound in top consumer China, and underscores how Asian markets are leading crude’s rally even as vaccines offer hope for a wider revival. The uneven nature of India’s recovery shares similarities with its neighbor’s revival -- gasoline use in both nations spiked when people returned to work -- while demand for diesel in the still-flagging South Asian economy lagged that of China.

“As we get closer to the Covid-19 vaccine rollout, the fundamentals of the economy being strong, we see a rapid V-shaped recovery in the overall consumption of petroleum products," Indian Oil chairman Shrikant Madhav Vaidya said in a statement.

In the first-half of this month, Indian gasoline and LPG sales were 10% higher than the same time last year, according to preliminary data compiled by the nation’s top three fuel retailers. The sale of diesel, the country’s most popular fuel, lagged year-ago figures by 5% while use of aviation fuel was halved.

The thrumming refineries are a stark contrast to the situation in July when lockdowns destroyed demand and prompted a diversion of excess fuels to onshore tanks, filling them to the brim.

Unlike China, where the demand recovery followed a near-complete eradication of Covid-19, India’s plants are returning to full capacity before the disease is gone. While daily cases are declining, restrictions on public transport and travel continue.

The strong gasoline demand and seemingly “endless" thirst for LPG have been enough for Mangalore Refinery and Petrochemicals Ltd. to operate its plant in southern India at close to 100%, with runs expected to rise above nameplate capacity in January and through the first quarter, Managing Director M. Venkatesh said.

Many Indian refiners can raise processing rates above capacity due to debottlenecking and expansion projects.

The Mangalore plant will process 1.3 million tons of crude in December, up from 1 million in November, he said. Crude runs are expected to rise to 1.4 million in January and February.

Strong automobile sales and an uptick in industrial and construction activity are also expected to lift demand, said Hindustan Petroleum Corp. Chairman Mukesh Kumar Surana. Refinery runs at HPCL are currently at over 100%, with petrol sales growing at a pace of about 5%.

At Indian oil, crude throughput rose to 100% of designed capacity in November from 88% a month before and 55% in early-May, the company said in a statement. Overall consumption of petroleum products was almost at pre-Covid levels last month with gasoline and LPG sales posting a year-on-year increase.