Carmakers must do better just to keep up in China 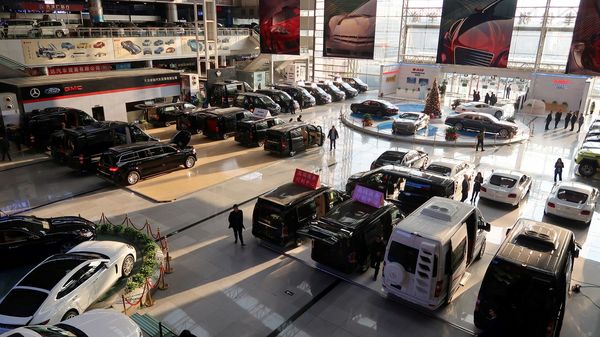 The world’s largest car market is cratering and there are few signs of a recovery. It was never supposed to get this bad — and even if it got close, a helping hand from Beijing would steer things out of any prolonged trouble. Or so people thought...

Instead, passenger car sales in China fell 9.5% last year, more steeply than the 4.3% in 2018, which was the first annual sales decline in over a decade. The drop has dragged down the global automobile industry and its deep supply chain.

That leaves automakers in limbo. After years of relying on the Chinese market for its double-digit volume growth, they don't seem too sure about whom to build cars for, or what kind. Beijing’s lackluster stimulus last year included a grab-bag of measures: removal of car-purchase limits, support for buying electric cars and incentives to build infrastructure like rural gas stations. They haven't done much to revive demand. Consumers were waiting for more, which simply led to a steeper slide in sales.

With no new sweeteners and the distortions of past stimuli fading, a real picture of demand is emerging. It’s nuanced. There are fewer first-time buyers, and more who are purchasing replacement vehicles. They’re increasingly looking to upgrade, and also buying more used cars. In a word, consumers are being more discriminating.Luxury carmakers account for around 15% of the market and are doing better than the rest. Porsche Automobil Holding SE, for instance, delivered 86,752 vehicles to customers in China last year, up 8% from 2018. In December, BMW Brilliance Automotive Ltd.’s average daily vehicles sales rose 21% on the year, up from 5% in November.

Down the food chain, buyers of family-friendly cars are upgrading. Demand for sports utility vehicles and sedans remains depressed but is shifting toward higher-end, in-between cars, according to analysts at Goldman Sachs Group Inc. Buyers of these so-called multi-purpose vehicles, or MPVs, have long bought the same few basic models, priced between 40,000 yuan ($5,800) to less than 100,000 yuan. As the market was flooded with SUVs, aspirational buyers stayed away. Now, manufacturers are improving design and comfort, and raising prices.

A slew of MPV models will be released this year. Going by low discounts compared to the rest of the market, demand remains sturdy. Goldman’s analysts estimate that in every 1% of demand that moves to the higher-end MPVs lies an annual revenue opportunity of almost 50 billion yuan ($7.25 billion). Here’s the hard reality: The double-digit growth days of selling nearly 25 million cars a year are vanishing in the rearview mirror. So are outsize profits from China. Much like the U.S. market, the type of demand will evolve and how people get around will change. Younger Chinese are more inclined to use ride-hailing services. The older people get, the less likely they’ll obtain driving licenses. China’s population is aging rapidly. This is a structural slowdown.

In theory, China has plenty of room to sell more cars. Penetration rates are low and so is the national percentage of licensed drivers. The carmakers are banking on semi-urban China, ostensibly the most upwardly mobile consumers. But sales are unlikely to top 20-some million a year, even with the push toward electric vehicles (only 5% of cars sold now) and regulations that will eventually force buyers to go green. For now, higher technology only raises the cost of car ownership out of reach.

The market is oversupplied, no doubt. The good news is that inventories are coming down as automakers try to stay in the black. Toyota Motor Corp. has increased the types of models it sells in China and gained market share. As weaker players drop out and the industry consolidates, the likes of Honda Motor Co. and Volkswagen AG are taking a bigger piece.

Failure to rigorously manage output will mean a pile of clunkers. Changan Ford Automobile Co. is sitting on some of the highest levels of inventory, as is SAIC General Motors Corp.’s Baojun. GM continues to lose market share. Ford Motor Co. said last week that its sales in China dropped 26% in 2019. European carmakers have also struggled.

Making money by churning the assembly lines won’t cut it anymore. The China Road to success is a lot narrower. Only the companies that drive it smarter will survive.