Mompha Junior is quite accustomed to some ultra expensive gifts. After all, he did receive a mansion from his father when he turned six.
By : HT Auto Desk
| Updated on: 13 May 2022, 03:54 PM 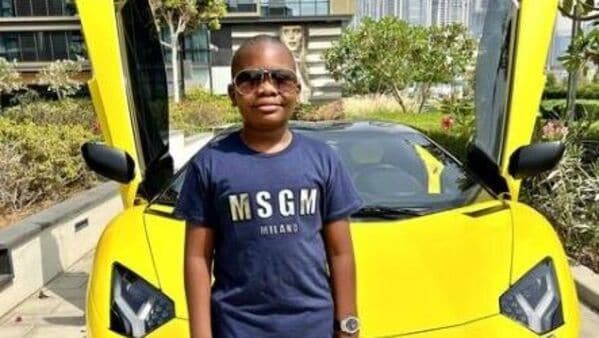 He may not be legally allowed to drive just yet but no one is going to stop Muhammed Awal Mustapha from enjoying his ultra expensive birthday gift from the passenger seat of the shiny yellow Lamborghini Aventador. The supercar is yet another edition to his incredible collection of ultra expensive machines on wheels, one that may yet be his most prized possession.

Also called Mompha Junior, he is the son of Nigerian internet celebrity Ismailia Mustapha or Mompha Senior, the CEO of Mompha Burea De Change, Lagos Island. The father recently bought a Lamborghini Aventador priced at 300,000 pounds or approximately 2.82 crore for his son on his 10th birthday. Both son and father were quick to share a photo of the gleaming supercar with its new owner. “Your smile is also the reason for our constant Happiness We love you!!!" the father captioned the photo. “Happy birthday Son. Muhammed Awal is 10."

Mompha Junior is widely regarded as Africa's richest kid and his latest supercar may be yet another proof of it. But the Aventador is hardly the first in his garage as his family has a particular liking for a number of Lmaborghini models. But while supercars sure grab attention online, the family also owns a number of Rolls Royce models, several mansions and at least two private jets. And they aren't hesitant to pose with each of these and take the snaps to the world through social media sites.

In the past Mompha Senior has been arrested at least twice on charges of corruption but that has not stopped him from living it up. But while some cast doubts on his way of earning big bucks, there are more who question his choice of splurging on his son and showering him with ultra expensive presents. A number of comments on his social media posts point to how he may be pampering his child too much for his own good and that while a rich lifestyle itself isn't a crime, it may be morally incorrect to let a child own a long list of material things like mansions, supercars, designer apparels and the likes.