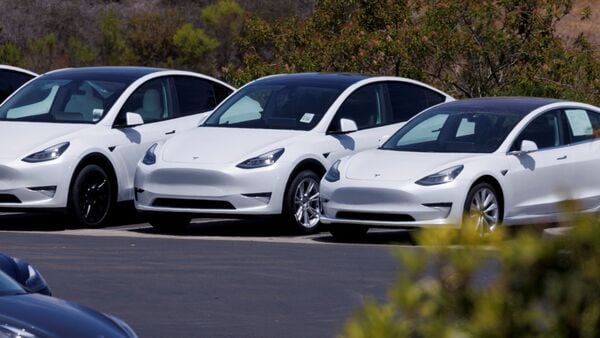 File photo: Tesla electric vehicles are shown at a sales and service center in Vista, California.

Tesla is ramping up production capabilities. And how. With a clear intent to increase its already impressive lead in the world of electric vehicles (EVS), the Elon Musk-led company is now looking to end the current calendar year by hitting the 20 lakh annual production milestone. The stakes are high, the pressure is on, and the target may well be in sight.

Striking the 20 lakh milestone is believed to be absolutely essential as Tesla has the eventual aim of manufacturing two crore units per annum by 2030. And while that figure may seem highly ambitious, Musk has already confirmed plans of having at least a dozen more facilities across the world in the times to come. At present, the two latest Tesla facilities – in Berlin and in Texas – are gradually ramping up abilities to fire on full cylinder. For a company that managed to manufacture a little over a million units in all of 2021, Tesla is on the move. “If all goes as planned, we will be exiting 2022 at a 2 million annual run rate," Musk said.

While Tesla does have a power say in the world of EVs, rivals are constantly looking at ways to catch up. In the particular case of China – the world’s largest auto market, the battle is quite intense between local and global players. The Tesla facility in Shanghai caters to both local demand and dispatches to select European markets. And while the facility here has had its fair share of challenges with Covid-induced lockdown, it is back to pumping out units at full capacity. In Europe, Tesla is facing intense heat from the likes of Volkswagen AG, Stellantis and others. In the US, the likes of Ford, GM, Hyundai and Kia are locked in a riveting contest. As such, there are reportedly plans to have a new Tesla facility on the eastern coast of the US as well as one in the UK. Would all of the existing factories as well as new facilities eventually combine to help Tesla achieve its established goal? Time will tell.