Tata Altroz takes on established players like Baleno from Maruti Suzuki and Hyundai's Elite i20.
By : Shubhodeep Chakravarty
| Updated on: 23 Jan 2020, 10:10 AM 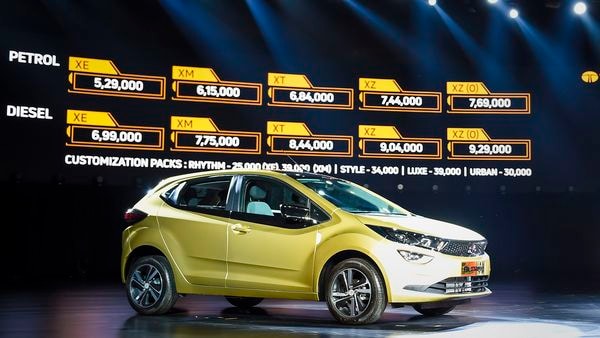 Altroz premium hatchback by Tata Motors on display during the launch in Mumbai.

MUMBAI : Tata Motors has bet big on the Altroz which sits in a segment that has been rather lifeless over the past several months. The overall lull in the Indian auto industry notwithstanding, the hatchback segment is in need of an impetus and this is what Tata Motors is hoping for with its premium offering.

Launched at a starting price of ₹5.29 lakh (ex showroom) and going up to Rs. 9.29 lakh (ex-showroom) for the diesel top variant, the Altroz is targeted at customers who want a more premium drive. The road ahead may not be simple considering rivals like Maruti Suzuki Baleno and Hyundai Elite i20 are established and acclaimed players. Mayank Pareek, President, Passenger Vehicles at Tata Motors, however is banking on a 'late follower's advantage' to help the company's latest offering. "With respect to the other two players in the segment, we can have a late follower's advantage working for us," he said at the launch of the car. Asked to explain further, he said, "Late follower advantage refers to how we have managed to study what customers interested in a hatchback wants and desires. We have also been able to study our rivals, examine the chinks in their armour."

While Pareek did not put a figure, he said he is confident of Altroz capturing a significant market share. "We are not playing the price game. We are in it for the value game. That is what Altroz offers. Premium hacthback segment looks good and 50% customers in this segment are first-time buyers," he said, adding that with markets getting fragmented, it is important to focus on customers who are looking for specifics when considering the prospect of buying cars.

Pareek chose to also underline that Altroz is the only hatchback to offer BS 6-compliant diesel engine in India. And the price structure for it is not a bother for him. "BS 6 entails price rise. There is resistance early on and then it grows on people. There are also other very important factors like safety. Would you compromise on safety for your family for a car that costs less?" he asked, adding that the debate in the Indian car market is now moving away from price and moving towards value.

Altroz has managed to secure a five-star safety rating in Global NCAP tests and boasts of several segment firsts. These coupled with stylish looks could work in its favour even if its rivals are power players who have been around for quite some time.