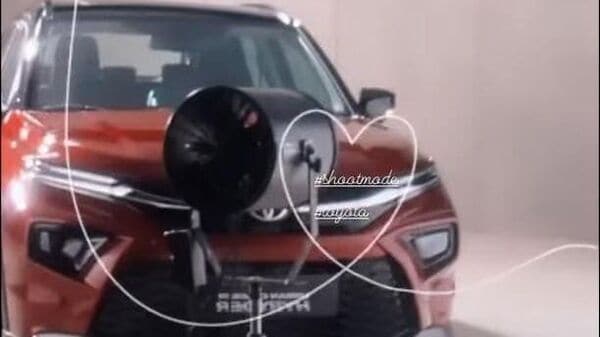 Toyota Hyryder SUV has been making a buzz in the Indian market for the last few weeks. Ahead of its slated debut on 1st July, the SUV has been leaked online. The image shows the car during a TVC shoot. This is the first time, the compact SUV has been spotted in its production form. The Toyota Hyryder comes as a result of the partnership between two Japanese auto giants - Suzuki and Toyota.

(Also Read: Planning to buy an SUV? There are the three models you should wait for)

Speaking about the design revealed by the leaked image, the Toyota Hyryder comes with a bold front fascia that is in line with the contemporary models from the brand. It gets sleek and curvy headlamps, and integrated LED daytime running lights. The headlamps come with a sleek chrome trim that connects the brand logo positioned at the centre of the front profile.

The front bumper appears bold looking with a large air intake and flanked by fog lamps positioned at the black housing. A thick skid plate is also there. However, it is not clear, if the skid plate is functional or just a showpiece. Toyota Hyryder is expected to be based on the localized version of the automaker's TNGA-B modular monocoque architecture. It would be built locally at the automaker's Bidadi plant in Karnataka.

Toyota is yet to reveal any detail about the specification of this upcoming SUV. However, the Indian market spec model could get power from a 1.5-litre K15B petrol engine sourced from Maruti Suzuki. This engine is likely to come with a hybrid system. Transmission options are likely to include a six-speed manual and a six-speed automatic unit.

Upon launch, the Toyota Hyryder SUV will challenge rivals like Kia Seltos, Skodas Kushaq, Hyundai Creta, Volkswagen Taigun and MG Astor. Expect it to be available at a starting price of ₹10 lakh.