Home Auto Cars News Jimny 5 Door Suv Is Not A Rumour Anymore. Here Is The Proof

Jimny 5-door SUV is not a rumour anymore. Here is the proof

Suzuki Jimny's three-door version was showcased in India during the Auto Expo in 2020. There have been speculations about a possible India launch of the SUV too.
By : HT Auto Desk
| Updated on: 08 Jul 2022, 09:25 AM 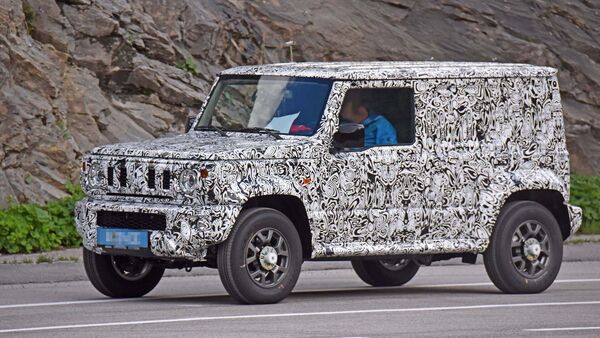 Suzuki Jimny 5-door SUV is soon going to be a reality. Despite all the speculations, the Jimny long-wheelbase version was recently spotted testing on the road, wrapped in a camouflage. Before any more speculations, it is important to note that the SUV will break cover later this year for the global markets only. Though the short wheelbase version of the SUV was showcased in India earlier, there is no confirmation of Maruti Suzuki launching Jimny in either wheelbase form in India yet.

According to reports, the 5-door Suzuki Jimny has grown in size. It now stands 3,840 mm in length against 3,470 mm of the short-wheelbase version. The wheelbase too has grown wider to 2,540 mm from 2,240 mm. The width and the height of the SUV is likely to remain the same as the three-door model.

Suzuki will also upgrade the powertrain of the long-wheelbase Jimny. Under the hood, Suzuki will use a 1.5-litre turbocharged petrol engine with hybrid technology. The earlier 1.5-litre naturally aspirated unit was discontinued in the UK because it failed to meet emission norms.

Though the test unit of the Jimny is carefully covered in black and white zebra pattern camouflage, there are several things that have been revealed through spy shots across the social media. The exterior of the new Jimny does not look too different from the three-door version, except that the section between B-pillar and C-pillar has grown in size expectedly. This section is likely to house a large glass window.

Besides the exterior, key details about the interior of the 5-door Jimny has been revealed. The new SUV will come with an upgraded 9-inch touchscreen infotainment system. The cabin space is also going to be larger than the previous model due to the expansion of wheelbase and overall length. However, it is still not clear how much space will be there if Suzuki decides to add a third row to the SUV.